An EMP attack centered over New York City could cover the entirety of the northeastern United States, paralyzing the power grid and sparking mass chaos 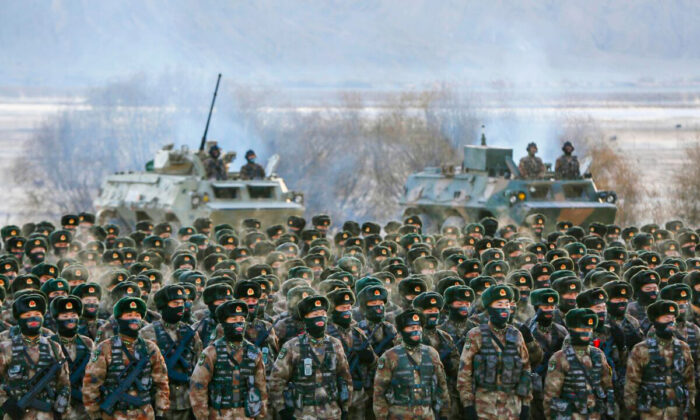 The United States is vulnerable to attack from an electromagnetic pulse (EMP), according to experts. Such an attack could devastate the nation’s power grid and wipe out vast swaths of the population.

“The risk of an EMP attack on U.S. infrastructure is very high, particularly in this international environment,” said Sam Kessler, a geopolitical adviser at North Star Support Group, a multinational risk-management firm.

The news comes amid growing concerns about the Chinese regime’s expanding military capabilities and its alleged development of first-strike nuclear capabilities.

What Is an EMP Attack?

An EMP is a burst of electromagnetic energy that disrupts communications and damages electronic equipment. An EMP can be created by nuclear missiles, radiofrequency weapons, and natural phenomena such as geomagnetic storms.

While any nuclear weapon can create an EMP, specialized EMP weapons such as so-called super-EMP bombs generate particularly strong gamma radiation that multiplies the effect of the pulse, extending the destruction over a greater range.

Such an attack, if centered over New York City, for example, would cover the entirety of the northeastern United States, according to a statement to Congress by Peter Pry, an EMP expert and the executive director of the Task Force on National and Homeland Security, an advisory body.

In a slide deck from 2018, Pry said that a high-altitude EMP blast could knock out 74.4 percent of U.S. power generation capacity. Such an attack could cause months-long losses of electrical power and create cascading effects for food, water, and heat supplies, and resulting in a mass loss of life.

“EMP weapons offer Russia, China, and the ICBM-armed rogue states a fast, cheap and effective means to make most Americans feel immediately the horrors of war, making them attractive to enemies who seek to create pressure on the U.S. leadership to capitulate or negotiate,” said Rick Fisher, a senior fellow at the International Assessment and Strategy Center.

In a report compiled by Pry in June of 2020, he said that China assuredly already has super EMPs in its possession, and that hypersonic systems could be used to deliver them.

“China is on the verge of deploying or has already deployed hypersonic weapons that could potentially be armed with nuclear or non-nuclear EMP warheads, greatly increasing the threat of surprise attack against U.S. forces in the Pacific and against the United States.”

Little Ado About Something

While EMPs have for decades been recognized as a serious threat to the United States, little meaningful action has been taken to prevent or mitigate their destructive capacity. Indeed, Gen. Charles Brown, the Air Force chief of staff, said earlier this year that the U.S. military had “been asleep at the wheel” since Desert Storm in the early 1990s on the issue of electromagnetic warfare.

Two congressional commissions, known as the EMP Commissions, were established to research the destructive potential of EMPs, starting in 2001. The first report from those commissions came in 2004 and found that “China and Russia have considered limited nuclear attack options that, unlike their Cold War plans, employ EMP as the primary or sole means of attack.”

At a 2015 hearing before two subcommittees of the House Committee on Oversight and Government Reform, George Baker, professor emeritus of applied science at James Madison University, said that “there is no one in charge” at the Federal Energy Regulatory Commission (FERC) and North American Electric Reliability Corporation (NERC), which collectively oversee and ensure the bulk transmission of power in the United States.

Pry spoke at the same hearing. He called the FERC and NERC “extremely dysfunctional,” and questioned the ability and will of both organizations to protect U.S. citizens. He ultimately advised that Congress abolish both organizations and replace them with a new regulatory commission. His advice wasn’t taken.

For the next few years, reports by federal agencies continued to regard EMPs as a “low probability/high consequence” threat. That changed in 2019, however, when satellite imaging appeared to uncover secret EMP-testing facilities in China.

Then-President Donald Trump then signed an executive order to bolster both civilian and military defenses against EMP attacks, although the response to the order has been slow.

“Those who have organized, led, and staffed the train of EMP Commissions deserve our deepest thanks,” Fisher said. “Our relative unpreparedness for this threat is not their fault, but that of successive administrations who have not given this threat a useful priority.”

DHS released a report in 2020 highlighting some progress in carrying out the order. The report said that DHS was engaged with the private and public sectors in carrying out demonstrations of pilot programs to test EMP resiliency. It named one such example, the San Antonio Electromagnetic Defense Initiative, a public-private effort dedicated to developing a resilient grid.

A spokesperson from FERC said that the organization remained committed to the executive order.

“FERC is in touch with other federal agencies, such as DOE and DHS, regarding Executive Order 13865 to assist with its implementation,” the spokesperson said.

Though the persistent threat of EMP attack has gone largely without response, the seriousness of such an attack is difficult to comprehend, surpassing as it does the effects of most any conventional warfare.

A 2017 statement by the EMP Commission cited ambassador Henry Cooper, former director of the U.S. Strategic Defense Initiative, who wrote that a high-altitude EMP blast could result in the shutdown of the U.S. electric grid for an indefinite period, leading to “the death within a year of up to 90 percent of all Americans.”

“Few Americans have any idea what it is like to live without electricity, constant digital communication, or immediate access to medical or transportation services, which can be taken away by EMP weapons,” Fisher said.

“The damage of an EMP attack destroys anything with an electrical circuit, and that means electrical systems and infrastructures that we rely on as a society would no longer be intact,” Kessler said. “It would create societal chaos and unpreparedness in a society that would be transitioned back to a 19th-century way of life.”

Fisher said that such a system could be used to conceal a surprise EMP strike, but was unlikely to be used to directly launch an EMP strike, as the hypersonic vehicle travels at a lower altitude than is required by an EMP detonation.

If the second missile that originated from the hypersonic vehicle went to a higher altitude, however, it could theoretically field an EMP bomb.

Kessler described such a scenario as “very realistic,” and added that there were reports that such a technology is being developed in both China and the United States.

Moreover, Pry warned in 2015 that EMPs wouldn’t be used alone, but in conjunction with sabotage and information and cyberwarfare initiatives, designed to wholly overwhelm and stun the U.S. defense effort.

He referred to this strategy as a “new Blitzkrieg,” a reference to the Nazi strategy of lightning warfare during World War II, in which German tanks, planes, and artillery would quickly swarm and incapacitate Allied defenses.

Pry also warned that, because the nuclear blast that causes an EMP is detonated at a high altitude and doesn’t cause direct casualties, adversaries may not consider it a nuclear first strike. That might encourage adversaries to use the technology, as they wouldn’t fear nuclear retaliation.

That warning is in line with a recent report by the U.S.–China Economic and Security Review Commission, an influential U.S. congressional advisory body, which considered an EMP to be part of China’s nuclear counterforce capabilities. It suggested that the Chinese regime could use a limited demonstration of nuclear weapons to create an EMP.

“Chinese leaders could employ this strategy during a crisis to shock U.S. political leaders and demonstrate their resolve to escalate to higher levels of nuclear violence should the United States fail to ‘back down’ over the issue at hand,” the report states.