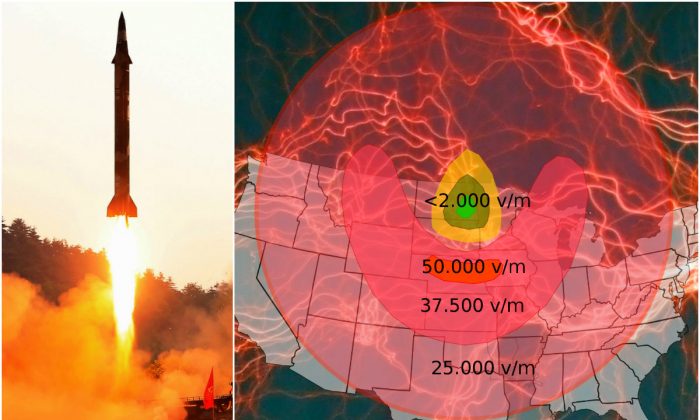 L: The test fire of a ballistic missile at an undisclosed location in North Korea in an undated photo released by North Korea’s official Korean Central News Agency on May 30, 2017. (STR/AFP/Getty Images); R: Effects of an electromagnetic pulse at 400 km above the Earth's surface. (NACLE2/Public Domain;Iantresman/CC BY 2.5)
National Security

US Vulnerable to Electromagnetic Attack From Adversaries Such as China, North Korea: Experts

Experts are warning that the United States is vulnerable to an electromagnetic pulse (EMP) attack from adversaries such as China and North Korea, which could render the nation helpless and shut down basic components such as military communications, water delivery systems, food, and transport.

Speaking at a virtual forum hosted by the Universal Peace Federation on Tuesday, experts stressed that time is running out to invest in defending the country from such an attack and urged officials to take action.

While not deadly on its own, an EMP attack can ruin most electronics within a massive radius and could cripple the power grid, sending the country back into the 18th century and into a complete and long-lasting blackout. That could result in the eventual deaths of 90 percent of the U.S. population, experts from the congressional EMP Commission have warned.

Such a catastrophic scenario could be triggered by an EMP attack from China, which already harbors “super EMPs” that could create “massive, deep damage,” according to an analysis by the Task Force on National and Homeland Security, a congressional advisory board.

In August, China reportedly tested a new Hypersonic Glide Vehicle (HGV) that could deploy an EMP, demonstrating its incredibly advanced space capability and leaving experts fearing it could destabilize the United States.

U.S. intelligence services were allegedly caught by surprise by the event in August and the HGV’s performance, The Financial Times reported.

“That poses a real threat of possibly being able to win a war with a single blow by means of an EMP attack,” Peter Vincent Pry, the executive director of the Task Force on National and Homeland Security said on Tuesday. “Moreover … they don’t envision employing an EMP by itself. It would be used in conjunction with cyberattacks and physical sabotage, and non-nuclear EMP.”

“This is regarded by Russia, China, North Korea, and Iran as potentially the most decisive military revolution in history,” Pry said. “By attacking the technological Achilles heel of a nation like the United States, you could bring us to our knees and not even have to do battle with the Marines or the Navy or the Air Force, and win a war in 24 hours with a single blow—a combined EMP cyberattack.”

However, since that executive order was issued, the Department of Energy (DOE) and Department of Homeland Security (DHS) have done nothing very little in the way of protecting the national electric grid or other critical infrastructures of which 330 million Americans are dependant upon.

As recently as May of this year, Sen. Ron Johnson (R-Wis.) called for enhanced measures to be taken to protect the electric grid from threats of  EMP disruptions, nuclear weapons, and geomagnetic disturbances GMD such as solar storms, noting that the recent Colonial Pipeline cyberattack and ensuing shutdown had exposed “existential” vulnerabilities in the U.S. fuel and electrical grid.

“We are very vulnerable,” Johnson said while calling for further investment to shore up grid resiliency. “We’re spending all these trillions of dollars in infrastructure, let us spend a couple of billion and pre-purchase backup, large power transformers in case there’s an EMP or a GMD issue with our electrical grid.”

The executive director of the Task Force on National and Homeland Security on Tuesday cited federal bureaucracy and other factors as to why little has been done to bolster protections of the U.S. electrical grid.

“We do know how to protect against it. It’s not a technological problem. It’s a political problem,” Pry said.

Experts also pointed to North Korea, which it said does not need cutting-edge military capabilities to be able to inflict serious and long-lasting damage to the U.S. through EMP technology.

“There is no need for precision. North Korea doesn’t need to have a very good ballistic missile in order to precisely deploy and detonate the weapon,” said Plamen Doynov, a professor at the University of Missouri-Kansas City and chief technology officer at the company EMP Shield.

“There are active protection measures that will ground the pulse as it strikes the electric system of a vehicle, for example. The good news is those technologies are out there, they exist,” said David Winks, managing director at AcquSight, a leading cyber, physical, and electromagnetic resilience firm. “I think it would be a good use of some of this infrastructure money to start investing in this.”