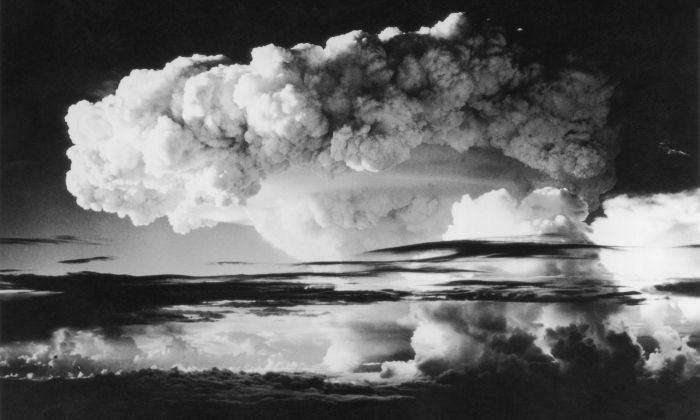 One hundred miles of sky covered by smoke and radioactivity from the first H-Bomb explosion (US) at Eniwetok Atoll in the Pacific on Nov. 1, 1952. (Photo by Keystone/Getty Images)
Chinese Regime

China, Other Regimes Developing EMP Bombs That Can Wipe Out 90 Percent of Populations

The study, titled “Nuclear EMP Attack Scenarios and Combined-arms Cyber Warfare” was written in July 2017 by Dr. Peter Vincent Pry, an expert on national and homeland security and director of the U.S. Nuclear Strategy Forum, a congressional advisory board. It was only cleared for public release by the U.S. Department of Defense in July 2018.

Last week, the report was published for the first time, as reported by the Washington Free Beacon.

Any nuclear weapon can generate electromagnetic pulses (EMP). But EMP bombs, sometimes referred to as sixth-generation weapons, can generate strong gamma rays and other radiation that spread very quickly. The radiation interacts with the oxygen and nitrogen atoms in the air to generate an extremely strong electromagnetic pulse. These pulses can damage all electrical and electronic equipment within the radius of the bomb.

Meanwhile, a super-EMP bomb, also known as a nuclear EMP, causes a nuclear explosion through electromagnetic radiation, the study noted.

The effects from an EMP bomb are dangerous within its entire field. This is why a scenario in which such weapons are deployed is referred to by U.S. analysts as “blackout warfare,” according to the congressional study.

After the EMP bomb is detonated, it will generate a potentially catastrophic effect, damaging electric grids, computing systems, and electronic systems—including those used by the military and critical infrastructures such as telecom networks, fuel pipelines, banks, and sanitation systems.

With electronic systems down, EMP-induced industrial accidents can spark explosions and widespread fires. When chemical plants explode, the toxic clouds generated would pollute the air, water, and earth. In addition, nuclear power reactors would run out of emergency power within days and explode, spreading radioactive plumes to nearby areas, the study predicted.

Without clean air and water supplies, people would not be able to survive after a period of time.

“In one year, as some EMP experts have warned for over a decade, 9 of 10 Americans are dead from starvation, disease, and societal collapse,” the study said. “The United States of America ceases to exist.”

To attack North America, these countries could use a wide range of methods to launch an EMP bomb: “satellite, a long-range missile, a medium- or short-range missile launched off a freighter, some kinds of cruise missiles and anti-ship missiles, a jet fighter or some kinds of jet airliner doing a zoom climb, even a meteorological balloon,” the study said.

The study noted that “totalitarian and authoritarian” authorities are building super-EMP bombs now, but didn’t give an estimated timeline for completion of the weapons.