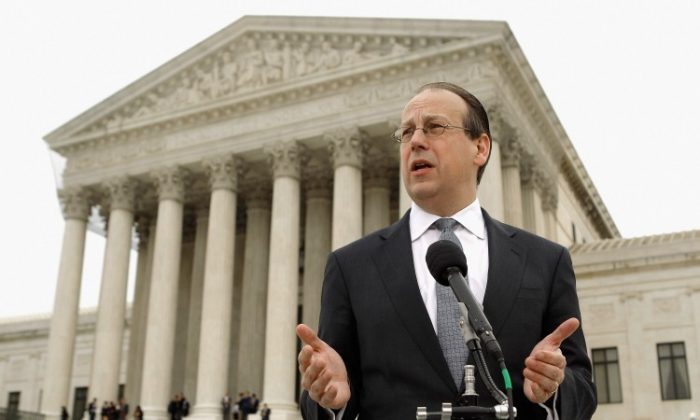 Paul Clement, the attorney representing the 26 states challenging the Patient Protection and Affordable Care Act, talks to the news media outside the U.S. Supreme Court on the third day of oral arguments over the constitutionality of the act, March 28 in Washington, D.C. (Chip Somodevilla/Getty Images)
US

WASHINGTON—On the third and final day of the Supreme Court’s hearing on the constitutionality of President Obama’s Affordable Care Act (ACA), the court’s Wednesday morning session focused on what should happen to the remainder of the law if in fact a ruling was made to strike down the contested individual mandate provision.

The discussion over the viability of other parts of the law, called the “severability” issue, was not an exercise in hypotheticals, as the court will face this challenge should it rule the mandate unconstitutional.

On Tuesday, the nine justices discussed for two hours the individual mandate, and observers commented that, by the end of the day, it appeared more than likely the mandate would be struck down.

Regarding severability, on Wednesday three positions were argued: Washington attorney Paul D. Clement, representing the state of Florida and 26 state attorneys petitioning the court, argued for discarding the law completely. If the individual mandate is unconstitutional, then the rest of the Act cannot stand, he said.

Community-rating means insurance companies are prohibited from charging differential prices to individuals based on their expected health needs; guaranteed-issue (mandatory coverage) refers to not refusing coverage for any reason, such as a pre-existing condition.

Clement argued that the loss of these two crucial features means the law cannot operate in the manner Congress intended, which was to provide patient protection at affordable costs.

But some of the justices were not eager to toss out the whole law. Justice Sonia Sotomayor asked why not let Congress fix it.

Clement countered that when something as critical to the functioning of the law as the independent mandate is removed, it’s like a patient without a heart. The exchanges he said are intertwined with other aspects of the law, such as employer mandate, tax credits, revenue offsets, and Medicaid. “At the end of that process, it is just sort of a hollow shell.”

Justice Stephen Breyer enumerated several items in the law, such as “getting doctors to serve underserved areas,” that have nothing to do with the individual mandate.

Lyle Denniston, American legal journalist with experience covering the Supreme Court, wrote “Breyer seemed to be assuming that the court would not strike down everything else, as Clement wanted, but follow a more selective path. Justice Samuel A. Alito Jr., also pressed Clement for a ‘fallback position’ if the court were not to strike down the remainder of the ACA. He slightly modified his view, saying the court could use its own judgment, but he wound up again arguing that “the best route would be to wipe the slate clean, and let Congress respond.”

The plaintiff, the federal government’s Department of Health and Human Services, held that the ACA is severable and just two provisions would be lost. Deputy Solicitor General Edwin S. Kneedler said that two provisions—mandatory coverage and community rating—are not severable from the minimum coverage provision, and he would leave it to the courts to sort things out.

But Justices Ruth Bader Ginsburg and Antonin Scalia preferred Congress do that. “Whether we strike it all down or leave some of it in place, the congressional process will never be the same. One way or another, Congress is going to have to reconsider this, and why isn’t it better to have them reconsider it,” Scalia said.

Kneedler wanted the Supreme Court to use the text of the act to determine where it is severable. Scalia responded, “Mr. Kneedler, what happened to the Eighth Amendment [cruel and unusual punishments]? You really want us to go through these 2,700 pages? Is this not totally unrealistic? That we are going to go through this enormous bill item by item and decide each one?”

At the end of the mornings’s proceedings, an appeal for salvaging the ACA was heard. Because neither the challengers of the law nor the government wanted to take the position, the court appointed Washington lawyer H. Bartow Farr III to defend salvaging all of the ACA if the mandate is unconstitutional.

In an afternoon session, the court heard oral arguments on the constitutionality of whether the federal government could impose Medicaid expansion costs on states that would risk losing funding if they refused.