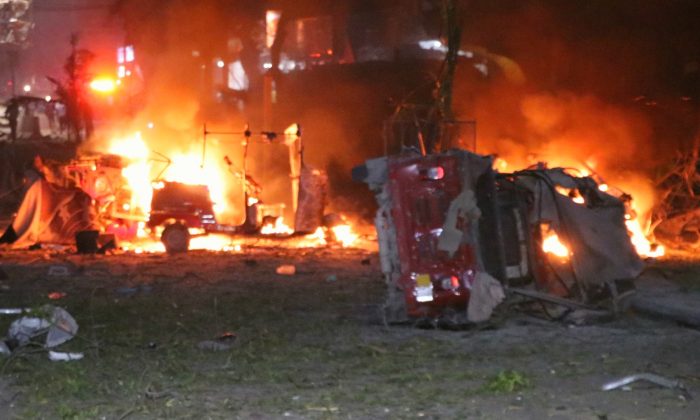 Shells of vehicles burn outside the Maka Al-Mukarama hotel in the Somalia capital, Mogadishu, on Feb. 28, 2019, after a car bomb exploded, killing at least five people and wounding 25 others. (Abdirazak Hussein Farah/AFP/Getty Images)
Africa

It was one of the heaviest blasts to have hit Mogadishu in recent times.

#AlShabaab claimed behind the attack in #Mogadishu and targeted Hotel Maka Al-Mukarama. pic.twitter.com/rZQdMESJpK

It took place in a business center in Maka Al Mukaram street which has hotels, shops, and restaurants, Police Major Mohamed Hussein told Reuters. Cars in the street were set ablaze.

“Over ten people died. A hotel is burning and other buildings were ruined by the blast. Twenty injured people were carried out. We believe more dead bodies are in the ruined buildings,” Police Major Abdullahi Ali said.

“We targeted and stormed Hotel Maka Al Mukaram. We are still inside it,” Abdiasis Abu Musab, Al Shabaab’s spokesman, said.

Ali said he did not believe the terrorists were inside the hotel. “But anything can happen because it is dark in some of the buildings because the blast cut the electric wires,” he said.

This is the aftermath of the blast. Sources confirm the exploded car was in the queue of a security checkpoint. Fatality feared #Mogadishu pic.twitter.com/fOcOXZK3le

Stinking gases from the blast reached several kilometers (miles) away from the scene.

Somalia has been convulsed by lawlessness and violence since 1991.

By Abdi Sheikh and Feisal Omar