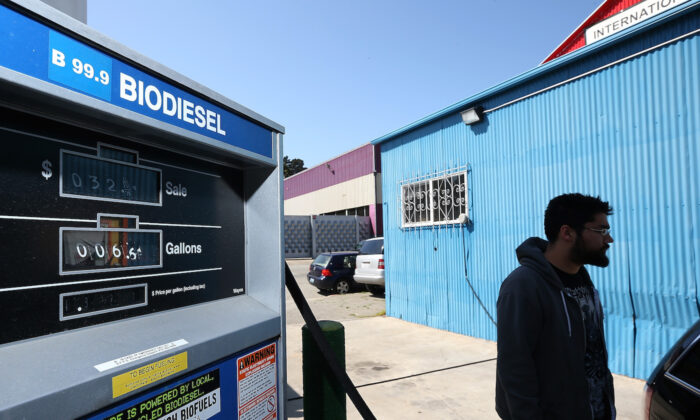 A man pumps biodiesel into his car at Dogpatch Biofuels in San Francisco, California on March 22, 2013. (Justin Sullivan/Getty Images)
Economy

American biofuel firms and refiners will reach less than 50 percent of their renewable diesel production targets for 2025, according to a study released on Jan. 18 from consultancy Cerulogy.

The 2025 renewable diesel goals, which have been touted by the Biden Administration, will most likely fall short due to policy and feedstock constraints.

Petroleum refiners across the country are being incentivized by the U.S. government to modify facilities to process waste and vegetable oils into renewable energy sources.

The Energy Information Administration expects renewable diesel production capacity in the United States to increase from 1 billion gallons currently to more than 5 billion gallons per year by 2024.

Cerulogy says that the program will likely yield no more than approximately 2 billion gallons of total renewable diesel production capacity by 2025 with a total of 3 million, far short of the projected goal.

It appears that the other 2 billion gallons of renewable diesel being planned for production will be delayed, canceled, or downsized.

The EIA’s forecast may be too difficult to fulfill, as it would depend too much on massively boosting feedstock imports.

It would also seriously reduce and disrupt production of already existing biodiesel, a similar product that blends diesel with biomatter from feedstock, according to Chris Malins, of the International Council on Clean Transportation.

Annual production of 2 billion gallons of renewable diesel by 2025 is the best “high-end estimate” for what can be achieved without causing serious market distortions, he said.

Other experts are concerned that the benefits from increased demand for vegetable oils needed to create renewable diesel fuel will be offset by indirect land-use changes and rising food prices.

The Environmental Protection Agency has already highlighted the risk of a negative market and environmental impacts if the supply of biodiesel is further increased, Malins added.

The current obligatory EPA volume for renewable biofuels sits at 20.77 billion gallons for 2022.

The EPA is considering removing hardship exemptions for small refineries with a capacity of 75,000 or less barrels per day to sidestep the program if they can prove that it causes disproportionate economic loss for their facilities,

The Renewable Fuel Standard was passed by Congress in 2005 and expanded in 2007, to reduce U.S. greenhouse gas emissions, expand the domestic renewable fuels sector, and reduce reliance on imported oil by requiring that gas and diesel contain a minimum volume of renewable fuels.

The standard volumes of renewable fuels are set annually by the EPA for conventional, advanced, and cellulosic biofuels, as well as biomass-based diesel.