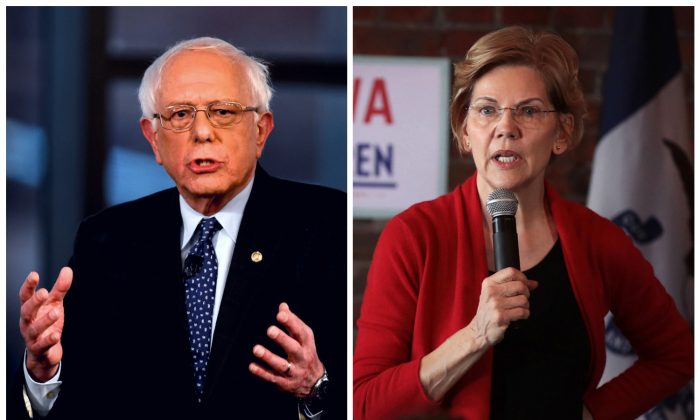 A new study from a bipartisan budget watchdog said Monday that it’s “impossible” to fund “Medicare-for-all” with taxes on the rich. The plan is popular among several Democratic candidates for president.

The Committee for a Responsible Federal Budget (CRFB) said that there is simply “not enough annual income available among higher earners to finance the full cost of ‘Medicare-for-All.”

“On a static basis, even increasing the top two income tax rates (applying to individuals making over $204,000 per year and couples making over $408,000 per year) to 100 percent would not raise $30 trillion over a decade,” it noted,

The organization also included an accompanying chart with the tax-the-rich option, listing it as “IMPOSSIBLE.”

It, however, found that the plan could be funded with a 32-percent payroll tax, a 25-percent income surtax, or a 42-percent value-added tax.

“A mandatory public premium averaging $7,500 per capita—the equivalent of $12,000 per individual not otherwise on public insurance” could also fund it, the study found. More than doubling corporate and income tax rates could also fund it.

Other ways include “an 80 percent reduction in non-health federal spending,” a 108 percent of GDP national debt, or a combination of approaches.

“Impossibly high taxes on high earners, corporations, and the financial sector” would also fund it, the study said.

But, it warned, all of the choices would pose serious consequences to the U.S. economy.

The “Medicare-for-all” proposal has become a talking point in the Democratic primary, and is being bolstered by Sen. Elizabeth Warren (D-Mass.).

“I will not sign a bill into law that does not cut costs for middle-class families,” she said at the debate in Ohio.

Sen. Bernie Sanders (I-Vt.) also frequently tells other Democratic candidates that he “wrote the damn bill,” saying that he is certain taxes will go up.

“It is appropriate to acknowledge that taxes will go up,” he said in the debate, “for virtually everybody, the tax increase they pay will be substantially less than what they were paying for premiums and out-of-pocket expenses.”

However, the study again warned about potentially dire consequences.

“Deficit-financing ‘Medicare-for-All’ would be far more damaging to the economy,” the report stated. “Assuming that such a massive increase in the debt would not roil financial markets or lead to high inflation, we estimate that a 108 percent of GDP increase in the federal debt would shrink the size of the economy by roughly 5 percent in 2030—the equivalent of a $4,500 reduction in per-person income—and far more in the following years.”