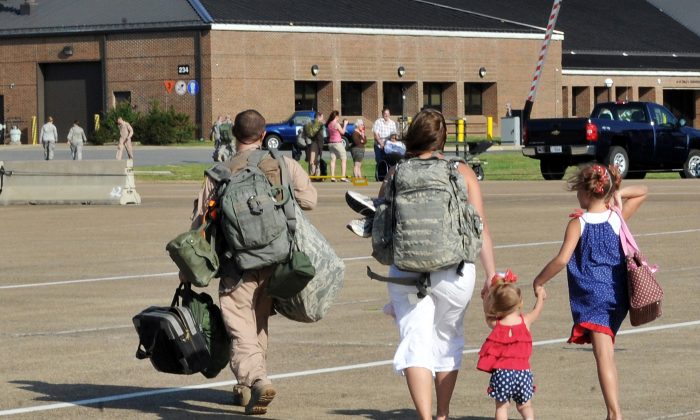 Staff Sgt. John Carlin walks off the flightline with his family May 13, 2001, at Little Rock Air Force Base, Ark. Sergeant Carlin is assigned to the 61st Airlift Squadron. (U.S. Air Force photo/Staff Sgt. Chris Willis)
US

A Blue Star Families report recently found that 43 percent of military spouses are out of work—compared to the 25 percent of civilian spouses.

They also found that approximately 89 to 93 percent of those spouses are women.

On a national level, 18 percent of women over the age of 20, who are military spouses, are unemployed—versus the national 4.4 percent unemployment rate.

Due to the constant moving of a military family, it’s incredibly difficult to maintain a job. Add in raising a family without your spouse, and it becomes nearly impossible.

The majority of military families stay stationed in one area for four years, before moving to a new city or state.

And although military bases have programs that aim to help spouses, the report shows there just isn’t enough funding.

The spouses desperate enough to land any job they can will often find themselves working in positions far below their education level. Military spouses forced to work for less, or “underemployment,” is anywhere between 35 to 40 percent.

“The math is shocking, but it also shows the way forward,” said Kathy Roth-Douquet, founder and chief executive officer of Blue Star Families. “If we work together to reverse the crippling employment trends facing military spouses, we will add money back to our economy.”

Their study estimates that the underemployment is costing the federal government anywhere between $710 million to $1.07 billion per year–mostly comprised in unemployment and health care benefits, and lost income taxes.

“Military spouses are faced with unique challenges in starting and maintaining a career as a result of the military lifestyle they lead that requires frequent moves and sometimes being the single parent while their military spouse is deployed,” said Pentagon spokeswoman and Marine Lieutenant, Colonel Gabrielle Hermes.

If you are a milady spouse and in need of assistance, you can check out these websites: Military Spouse Employment Partnership, and Military OneSource, for further information.