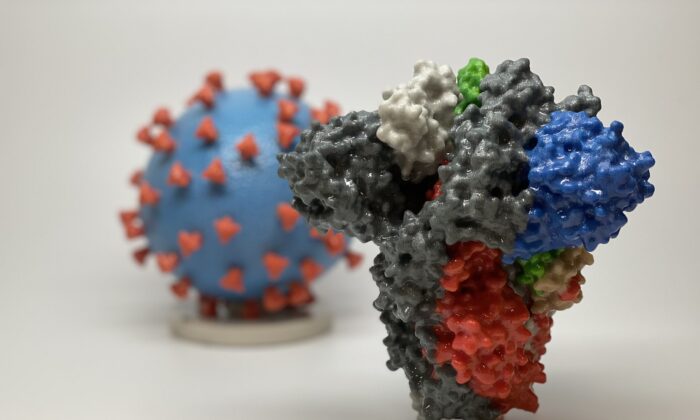 A new study in 2022 found that a neutrophil-associated cationic protein contained in saliva can prevent COVID-19 infection. This image shows a 3D print of a spike protein of SARS-CoV-2—the virus that causes COVID-19 (Front)—and a 3D print of a SARS-CoV-2 virus particle (Back). (Courtesy of The National Institute of Allergy and Infectious Diseases/RML)
PUBLIC HEALTH INFORMATION

Studies on Saliva Show Its Many Beneficial Properties

Ellen Wan
Ellen Wan has worked for the Japanese edition of The Epoch Times since 2007.
View profile
Follow
and Weber Lee

Several studies on saliva show that it has many beneficial properties including preventing viruses from binding to cells and promoting wound healing.

A study by a Japanese research team has shown that a specific protein in saliva has the function of preventing adherence of the CCP virus that causes COVID-19.

On July 6, a research team from Osaka Public University, Japan published a study in The Journal of Biochemistry and the Journal of the United States National Library of Medicine, respectively, demonstrating that neutrophil-associated cationic proteins contained in saliva can prevent CCP (Chinese Communist Party) virus infection.

Pathological studies have found that the SARS-CoV-2 virus infects the human body through binding its spike protein to the receptor protein on the surface of human cells. A research team led by professors MatsuBara Misako and Yoshizato Katsutoshi, who specialize in cell and molecular biology, applied diluted saliva to the surface of human cells, then introduced a virus with the same infection mechanism as the COVID-19 virus for observation. The results showed that proteins in saliva coated the ACE2 receptors so that they weren’t available to bind the virus, thereby blocking the infection. The higher the concentration of saliva, the harder it is for the virus to bind to the receptors on the cell surface.

The study also found that “histone H2A” and “neutrophil elastase” in saliva can block the binding of viral proteins to the surface of human cells.

The research team said that infants and young children secrete more saliva than adults, as the amount gradually decreases as we age, and production of specific proteins also decreases. This may be one of the reasons why elderly people are prone to disease and the cases are a lot more severe when they become infected.

Professor Matsubara said that he hopes to enhance the human body’s innate capabilities, rather than relying on drugs that attack viruses.

The University of Amsterdam in the Netherlands has discovered two small-molecule peptides, histatin 1 (Hst1) and Hst2, in saliva, which have several effects including promoting wound healing.

The researchers cultured epithelial cells obtained from the cheek inside the human mouth (a buccal swab) in several petri dishes, allowed the cells to proliferate until they covered the entire surface of the petri dish, scraped off a small piece of the cell layer to create an “artificial wound,” then added saliva to one dish and an isotonic solution that could maintain the cells to another.

After 16 hours, the wound in the cell layer soaked in human saliva was almost completely healed, while the control group cell layer still had an open wound.

Tao Hongjing, an ancient health-preserving expert, suggested that one should often consciously swallow saliva. Doing so has a nourishing effect on the trachea, esophagus, and stomach, and it can cure diseases, strengthen the body, and prolong life, he said.