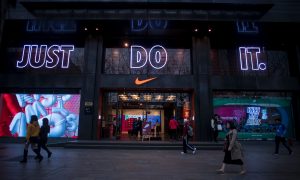 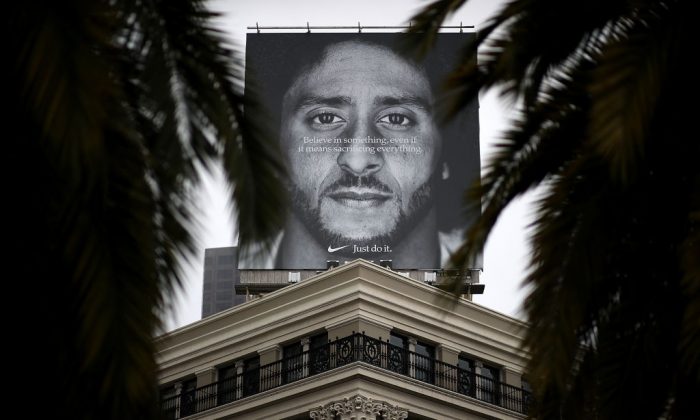 A billboard featuring former San Francisco 49ers quaterback Colin Kaepernick is displayed on the roof of the Nike Store in San Francisco, California on on Sept. 5, 2018. (Justin Sullivan/Getty Images)
Politics

The owner of the Colorado store that stopped selling Nike products after the corporation’s controversial Colin Kaepernick advertisement campaign said that the business is now closing.

Stephen Martin, owner of Prime Time Sports, said in September 2018 that in reaction to Nike boosting Kaepernick—a former NFL quarterback who has been slammed over starting the trend of kneeling during the national anthem in protest—he wouldn’t sell Nike gear.

At the time, Martin admitted he would likely have to close because of the decision.

“Pretty sure I won’t survive without them,” Martin told CNN. “I gotta do what I gotta do. I’m just doing it.”

The tagline for the campaign was, “Believe in something, even if it means sacrificing everything.”

Believe in something, even if it means sacrificing everything. #JustDoIt pic.twitter.com/SRWkMIDdaO

Martin said his decision was inspired by his father-in-law’s military service and time as a prisoner-of-war.

“He said the hardest part for me was watching his fellow soldiers get beat up and killed in front of him and he couldn’t defend them because it would have cost him his life,” he said. “So Colin, you don’t know what sacrifice is, you just don’t know what it is, in my opinion.”

In a Feb. 11 Facebook post, Martin announced that his store is closing and he would be selling everything for a 40 percent discount.

“Thank You for 21 mostly good years. For everybody that has offered help and support through the ‘Honor The Flag’ memorial wall and NIKE boycott, now is your time to help me liquidate. Please do your Facebook thing with everyone you know so this can go as quickly as possible,” he wrote.

Martin told KOAA that he can’t afford his monthly lease anymore at Chapel Hills Mall in Colorado Springs due to a decline in sales after the Nike boycott.

PRIME TIME SPORTS is closing. All merchandise 40% OFF. Thank You for 21 mostly good years.For everybody that has…

“I just can’t keep the doors open anymore. Being a sports store without Nike is kind of like being a milk store without milk or a gas station without gas. How do you do it? They have a monopoly on jerseys,” he said.

Martin said he’s still been selling team apparel but doesn’t have any jerseys because of his decision to drop Nike. He also canceled an autograph session with Brandon Marshall back in 2016 because of Marshall’s participation in the kneeling campaign.

“As much as I hate to admit this, perhaps there are more Brandon Marshall and Colin Kaepernick supporters out there than I realized,” said Martin. Still, he didn’t regret either decision.

People responding to Martin’s announcement had differing opinions on what unfolded.

“That is why businesses need to stay focused on business not politics,” one user said. “You ruined your own business for nothing. The bottom line is that people still want their products not your opinion. Remember that next time.”

“I have a absolutely [sic] no kinda of sympathy for you,” added another. “it’s like you and others like you that think yall are privileged and get away with the disrespect of others liberties.”

“Many have DIED to defend the rights the FLAG represents. I RESPECT that he took a stand to defend the FLAG……..NO RESPECT for you SOCIALIST lovers,” added another.

“So sorry you have to pay a financial price for your patriotic beliefs,” said another.