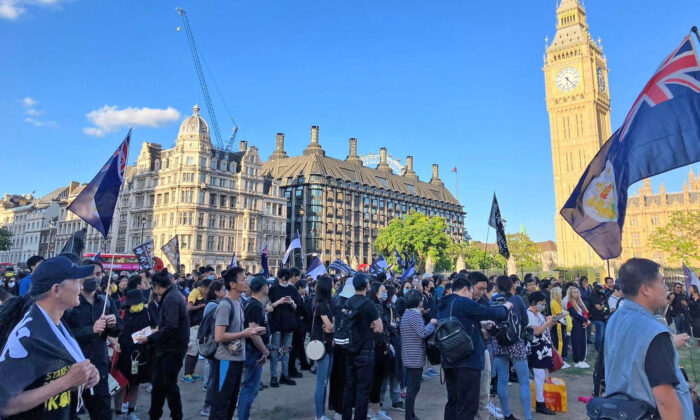 Aug. 31 marks the third anniversary of the “8.31 incident at Prince Edward MTR Station” in Hong Kong. It is of no surprise that large-scale commemorative activities are not able to take place in Hong Kong since the implementation of the national security law (NSL). Nevertheless, there was an increased police presence at and around the site of the incident this year. Most of them were deployed and patrolled around Exit B1 of the station and its neighbourhood.

They seemed to target particularly those citizens in black outfits, or those holding flowers. These people were the most likely to be stopped and checked. During one such incident, a 15-year-old boy was arrested on suspicion of disorderly conduct in public and resisting arrest. However, Hongkongers in the UK, the US, and Canada held no fewer than a dozen commemorative events and continued to demand a full investigation of police brutality. It was estimated a few thousand people attended these rallies.

From 6:00 p.m. to 8:00 p.m. on Aug. 31, “Hongkongers in Britain,” “Museum of Hong Kong,” “Hong Kong Parliament Electoral Organising Committee (HKPEOC),” “Victoria Harbour Group” and other Hong Kong people’s organizations assembled in London’s Parliament Square to start a rally, which drew about 1,000 people. Carmen Lau Ka-man, the host, and former Wong Tai Sin District Councillor, said in her opening speech that she hoped to mourn and erase the trauma caused by the anti-extradition movement through the rally, spread the faith of the movement, and continue the will of the people of Hong Kong.

One of the arrested, “Hon Po Sang” Wong Mou-jun, who was mistakenly reported to have been killed in the “Prince Edward Station 8.31 Incident,” was the convener of this rally. When he spoke on the stage, he directly reprimanded that the police indiscriminately attacked citizens at the Prince Edward Station three years ago, treating demonstrators in an inhumane way. He was also beaten that day and was charged with eight counts of misconduct.

After he went to the UK, he became a political refugee and cannot return home now. He believes that Hong Kong people should trust in freedom, democracy, and justice, which will eventually come to Hong Kong. On this, he encouraged everybody to work hard in various fields to achieve the grand aim whenever possible.

In his speech on stage, Benedict Rogers, founder of Hong Kong Watch, pointed out that the police were supposed to protect the safety of the people and prevent crimes. But since the Hong Kong police were seen to have used violence, they can no longer call themselves “the police,” and should better be known as a “criminal gang on a uniform.”

And so far, not a single Hong Kong police officer had met any criminal consequences resulting from that social movement incident. He described this as simply injustice in the most appalling sense. In that respect, he urged the British government to sanction those Hong Kong senior police officers involved.

Tell the Truth to Overseas Chinese

Simon Cheng Man-kit, founder of the “Hongkongers in Britain,” pointed out when speaking on the stage that with so many Hongkongers in the UK still participating in this rally, it proves that faith still persists. He described the “8.31 incident at Prince Edward Station” as the bloodiest and most distressing night of the anti-extradition campaign in 2019.

He did not know exactly what happened on the platform but just seeing the first aiders not able to get into the station to save lives there, did send a chill down his spine. In fact, that really made everybody feel sad and completely heartbroken too. He believes that Hong Kong people who have emigrated to the UK in recent years should tell all the “old overseas Chinese” living here before 2019, and the locals, about what exactly happened in Hong Kong on that day.

To move on from here, Hong Kong people should have faith in their beliefs, such beliefs are means to encourage thinking ahead, which is always the first vital step to changing the society for the better.

Another participant, “Ah Kit,” recalled when talking with the Epoch Times that on the night of the “8.31 incident at Prince Edward Station,” he started by watching the live broadcast. Later at around 12 midnight, he went to the exit of Prince Edward Station to criticize the police’s actions.

About an hour later when more and more people came, the police started clearing the area, and then the crowd dispersed. The reason he came tonight to the London rally is to voice his demand for a thorough investigation of the incident and insisted on the “Five demands, not one less,” that famous chant from protesters during all rallies in Hong Kong and overseas.

From 6:00 p.m. to 7:00 p.m. on Aug. 31, another Hong Kong people’s organization “Manchester stands with Hong Kong” launched an “anti-police brutality human chain” event on Market Street in downtown Manchester, with about 800 people participating.

The organizer prepared several panels written in English to introduce the background of the “8.31 incident at Prince Edward Station.” Some participants also held posters showing the background information related to it. They did attract some locals to stop and wanted to know more about the case. It was also of no surprise that many of the participants wore yellow masks, held up yellow umbrellas, and waved both the “Free Hong Kong, Revolution Now,” as well as the “British Hong Kong” flags.

The organizer said that the number of participants was more than expected. It was originally expected to take one hour to distribute the 500 leaflets, but they were all gone within about 20 minutes. They hoped that Hong Kong people can do a bit more by telling the local people what happened in Hong Kong three years ago and passing on its history to the next generation as a witness of the time.

Photos of the Brutal HK Police

From 11:00 a.m. to 6:00 p.m. on Aug. 20, another HK organization, the “Reading UK Stands with Hong Kong,” set up a photo exhibition on one pedestrian sidewalk, Broad Street in Reading, a south-east town in the UK. The exhibition was aptly named “Hong Kong is a Police State.”

The photos displayed at the event mainly revolved around the classic police brutality that occurred during the anti-extradition movement in Hong Kong in 2019.

For example, in the “8.31 incident at Prince Edward MTR Station,” where the police beat people indiscriminately; the “7.21 incident at Yuen Long,” when the gang dressed in white attacked the citizens stood alongside the police. Another set showed a large number of medical volunteers were arrested and sat on the ground with their hands tied with ropes during the “Besiege of PolyU;” some showed the police officers knelt on their necks to subdue an unarmed protester, who had blood on his face and on the ground.

There were also more bloody and violent scenes. One showed a police officer laughing while spraying reporters with the irritant pepper spray; an unarmed student protester was shot and wounded by a police officer with live ammunition in Sai Wan Ho.

A spokesperson for the event said that this photo exhibition was intended to make local people aware and continue to pay attention as regards the situation in Hong Kong. More important is to let them know present-day Hong Kong is a hugely different place now and has become more like a “police city.” She believes that despite the lapse of three years, Hong Kong people still cannot forget events such as “7.21” and “8.31,” and so far, not a single police officer had been punished for indiscriminate use of force. Hong Kong has no overt protests now, but absurd violations against individual freedom and rights continue to occur every day. She believes that Hong Kong people living in the UK need to continue to inform local people about what is happening in Hong Kong, and keep them concerned about Hong Kong, so they will continue to speak out for it.

Truth About the ‘8.31’ Remains Unknown

During the anti-extradition Movement in 2019, some netizens initiated a “religious procession” on Hong Kong Island on Aug. 31. In the evening after the parade, one passenger at Prince Edward MTR Station had an argument with a middle-aged passenger holding a mallet in the carriage. Soon afterward, a large number of police officers from the “Special Tactical Contingent (STC)” and riot police rushed into the platform and carriage.

According to eyewitnesses they assaulted passengers on-site indiscriminately and arrested 69 people. The police used the station as a “crime scene” as an excuse to drive away reporters within there, and also did not allow reporters and ambulance personnel to enter the platform from outside.

After the incident, Prince Edward Station was closed for 30 hours, and the number of injured people was revised several times, making the public suspect that the police may have killed someone there.

Nevertheless, police had always maintained that they only used “appropriate force” to subdue the protesters on that day and denied that anyone died during the incident.