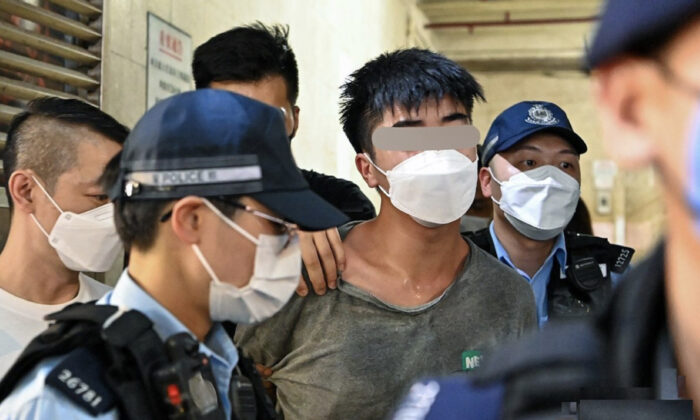 A 17-year-old boy was escorted by police officers to the back entrance of Union Square for a search."Don’t touch me," he shouted. Later he was taken to a police vehicle. (Sung Pi-Lung/The Epoch Times)
HK Current Affairs

‘Don’t Touch Me’ Shouts Youth, Arrested by Police on the 3rd Anniversary of 831 Prince Edward Attack

Aug. 31 was the third anniversary of the Prince Edward MTR Station Attack by Hong Kong Police, known as the “831 incident” locally. There was a heavy police presence both inside and outside the Prince Edward Station on that day. Some people wore black shirts and held yellow umbrellas as they passed by the station, some people placed flowers for commemoration, and some brought a model of Lady Liberty Hong Kong to the venue and took photos.

It is known that the surname of the arrested man is Tsang, about 17 years old, he was previously sentenced to probation for an illegal assembly case in 2020.

The Hong Kong Police issued a warning at 9:00 p.m. that they would drive away the people gathered near Prince Edward Station. If there were more than four people gathering, a group gathering restriction order would be issued.

A man who claimed to support the police, was suspected to have walked into the reporter’s area and shouted slogans, and attacked the reporter of the online media “Bobbi Information Station” at around 9:00 p.m.

Free HK Media reported that the arrested man was brought into the Mong Kok Police Station, during which a plainclothes police officer accused a reporter of robbery at the scene.

After a period of chaos, the Media Liaison Cadre apologized to the on-site reporters for the incident.

The 831 attack was a critical incident in the 2019 Hong Kong protests.

Dozens of riot police charged inside the Prince Edward MTR Station that night. They told everyone to leave the station before putting the station on lockdown.

Later, as all the exits were completely blocked, no one could escape.

At one end of the platform, police sardined more than 60 people onto a narrow escalator. Riot police attacked citizens and journalists uncontrollably and indiscriminately with batons, tear gas, and rubber bullets.

Many were injured. But no first aid responders or medics were allowed in.

A few citizens were cornered in one of the train compartments. They sat on the floor, defenseless, as riot police hosed them with pepper spray. A man was seen kneeling on the floor, protecting two women while crying in pain and pleading with the police to stop.

To date, Hongkongers believe that riot police had killed some people in the station, as they refused journalists entry on Aug. 31.

After the attack, passengers have been prosecuted for rioting, and assaulting police. Some were sent to jail, especially after the implementation of the national security law. Meanwhile, police officers who dehumanized Hongkongers during the protests were promoted.