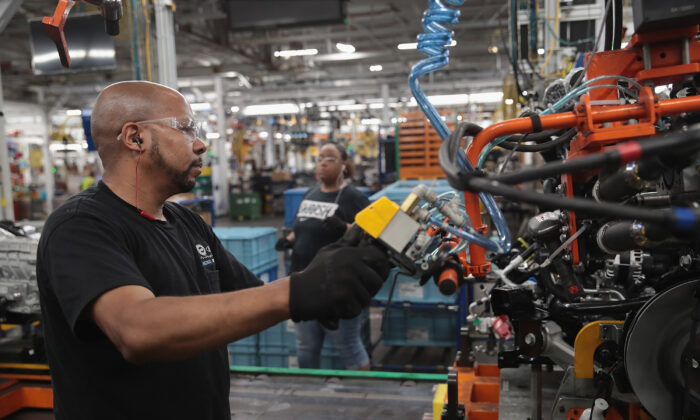 State of American Business ‘Positive, Growing, and Hopeful’ Amid Uncertainty

WASHINGTON–The state of U.S. businesses and the economy isn’t as pessimistic as is reflected by “the talking heads on cable TV and talk radio,” according to the nation’s largest business organization.

U.S. Chamber of Commerce President and CEO Thomas Donohue raised concerns about growing economic, political, and global uncertainties in 2020 but said U.S. businesses are still “positive, growing, and hopeful,” despite those challenges.

“The recession that many feared was looming in 2019 never showed up,” Donohue said at the annual State of American Business event hosted by the Chamber on Jan. 9.

“And by many measures—unemployment, wages, and the stock market to name just three—the economy is the strongest it has been in years,” he added.

The political climate in Washington is one of the biggest question marks for business leaders, as the uncertainty of President Donald Trump’s impeachment trial hangs over the Capitol.

He called on lawmakers to focus on an infrastructure bill, immigration reform, and bipartisan proposals that help address climate change.

“So, let’s flip the conventional wisdom that nothing gets done in an election year,” he said.

As in the past, the Chamber also raised concerns about the growing disregard of the free enterprise system and criticized far-left policies that have become popular among Democratic presidential candidates.

Donohue, in his speech, focused on candidates who have called for the federalization of some U.S. businesses, the elimination of private health insurance, a ban on energy production, a wealth tax to pay for government programs, as well as proposals to silence or limit the lobbying efforts of U.S. businesses.

While Donohue didn’t mention candidates by name in his speech, he did speak about a range of proposals touted by Democrats such as “Medicare for All” and the “Green New Deal.”

Some candidates support Medicare for All through a single-payer system, which provides automatic enrollment to a government plan. And many of the candidates have either co-sponsored or endorsed the Green New Deal, an ambitious environmental agenda introduced by Rep. Alexandria Ocasio-Cortez (D-N.Y.) and Sen. Edward Markey (D-Mass.).

In addition, candidates such as Sens. Elizabeth Warren (D-Mass.) and Bernie Sanders (I-Vt.) proposed a wealth tax that has sparked a fierce debate about whether the proposal is unconstitutional and would encourage capital flight.

Larry Summers, who served as Treasury secretary under President Bill Clinton and was chairman of President Barack Obama’s National Economic Council, criticized the idea of a wealth tax, saying that it would lead Democrats “down the wrong path.”

Donohue says that the business community wouldn’t stand on the sidelines of these political debates.

“We need a wake-up call in this country that disincentivizing growth and going after corporations as if they’re a negative force in this country is no way to generate collective prosperity,” he said.

The Chamber applauded both the United States and China for reaching a “phase one” trade agreement.

Donohue said the deal would “begin to reduce harmful tariffs.”

“But there’s still a long way to go,” he added. “’Phase two’ must address Chinese trade and industrial policies that put American businesses at a competitive disadvantage. It is in both nations’ interests to resolve those issues and restore our commercial relationship.”

Optimism improved after the world’s two largest economies announced in October that they had reached a partial trade agreement. However, there’s still a sense of skepticism in the United States when it comes to Chinese concessions on intellectual property (IP) rights and state subsidies.

The phase one agreement with China will be signed on Jan. 15 at the White House. Beijing said on Jan. 9 that Vice Premier Liu He, head of the country’s negotiation team in trade talks, will sign the deal in Washington.

According to the deal, Beijing has made commitments to buy in each of the next two years an average of $40 billion to $50 billion in U.S. agricultural products, which more than doubles the previous annual purchases.

Donohue noted that the agriculture deal is a “vigorous opportunity” for the United States.

When asked if the purchase amount was realistic, he said Beijing “wants to make that number work,” given the high demand in China for soybeans and poultry.