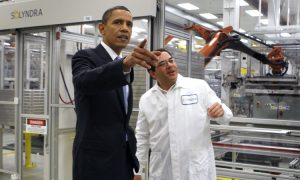 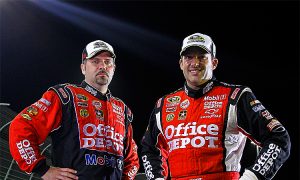 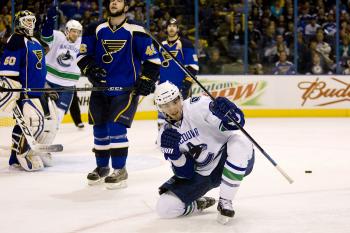 Well, since I proved my skills as a hockey playoff prognosticator (“Long Road to Stanley Cup Underway,” April 16), I thought I’d take a crack at a couple of second-round match-ups.

Just to blow my own horn a little, in my previous article, I predicted Boston to beat Montreal in five, Pittsburgh to beat Philly in six, and Anaheim to upset the top-seeded Sharks in six.

My only miscalculation was the Habs not managing to take a game off the Bruins. But I was perfect with my other two picks.

In the second round of the playoffs, teams are battle-tested and the pretenders have been found out and eliminated. The different dynamic though is the amount of rest some teams have afforded themselves (Boston, Vancouver, and Detroit by sweeping their series). And, of course, we know there isn’t much turn around time for teams that went seven (Caps and Devils).

Now on to my round two predictions. I tend to give the advantage to the teams who have had a week off.


Vancouver swept the St. Louis Blues in the first round with great goaltending from Roberto Luongo, solid defensive play, and an ability to score clutch goals.

Alex Burrows really came through as a playoff performer with his ability to do the little things well, play tough, and score goals.

The Chicago Blackhawks downed the Calgary Flames in six games in a very physical series. The young Blackhawks ultimately took advantage of Calgary’s lack of discipline and inconsistency from game to game.

With Roberto Luongo though, the Canucks have the edge between the pipes. Also, with home ice advantage and over a week’s rest, I expect the Canucks to get a leg up on Chicago and hang on for a series win.

Chicago won’t have the luxury of facing a weakened blue-line corps against the Canucks. And like the Flames, Vancouver is prepared to mix it up, if need be. The Blackhawks spent a lot of energy to beat the Flames and will find their offensive weapons stymied by the tight-checking Canucks.
Prediction: Vancouver in six.

The “Cardiac Canes” pulled off an unbelievable comeback to get by the New Jersey Devils in seven games on Tuesday night. Will they have enough gas in the tank for the well-rested Bruins?

My answer to this is no. Boston has better scoring depth and arguably has even better goaltending with Tim Thomas than the Devils do. I know that is hard to believe given that the Devils have Martin Brodeur, but based on current form, Thomas is No. 1.

Granted, the Habs made the Bruins look good but the Bruins are for real. They are a very complete team in all aspects of the game.

Eric Staal, Ray Whitney had terrific series against the Devils but Boston’s defense is more physical than New Jersey’s. And this is the area where I feel Boston will try to gain an advantage over the Canes.

Look for the likes of Milan Lucic, Zdeno Chara, and even Shawn Thornton, to rough up the Canes initially. Chara kept his cool during the Habs series and even though Lucic lost it, he remained a major problem for the Habs. He will be a thorn in the Canes’ side.
Prediction: Boston in five.