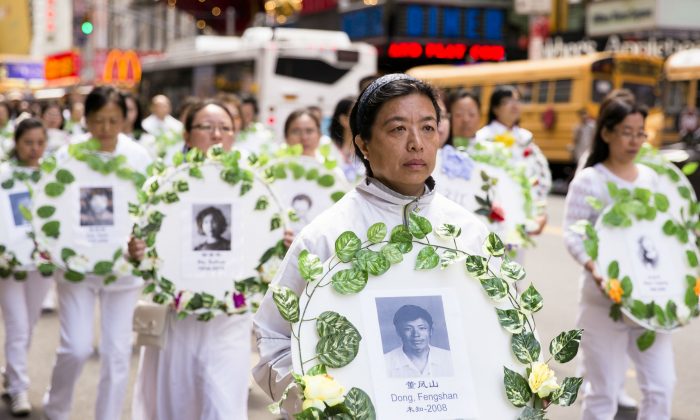 Falun Gong practitioners hold wreaths with photos of people who were killed inside China for their beliefs during a parade in New York City on May 12, 2017. (Samira Bouaou/The Epoch Times)
China Human Rights

U.S. practitioners of the spiritual discipline Falun Gong have submitted a list of Chinese officials who have committed human rights abuses, urging the U.S. State Department to deny the officials entry into the United States, according to the U.S.-based website Minghui.org.

The list was submitted in response to an indication from officials earlier this year that the department would increase scrutiny of visa applications from foreign officials who have participated in severe violations of religious freedom, according to a July 23 statement by Minghui, which serves as a clearinghouse for information about the persecution of Falun Gong in China.

An official advised Falun Gong practitioners in the United States that they could submit a list of Chinese officials known to be involved in the persecution, according to the statement.

Falun Gong, also known as Falun Dafa, is a spiritual practice that has been brutally persecuted by the Chinese Communist Party (CCP) for 20 years. The discipline, consisting of meditative exercises and a set of moral teachings centered around the principles of truthfulness, compassion, and tolerance, gained significant popularity in the 1990s, with an estimated 70 million to 100 million people practicing in China by the end of the decade, according to official estimates at the time.

Practitioners have been, and continue to be, imprisoned, tortured, and killed for refusing to renounce their faith. At any given time, hundreds of thousands of adherents are incarcerated in China for their faith, according to estimates by the Falun Dafa Information Center.

The center, in conjunction with U.S.-based nonprofit World Organization to Investigate the Persecution of Falun Gong, sent the State Department a list detailing the names, former and current positions, and abuses of Chinese officials involved in the persecution, Lai Shantao, president of the Falun Dafa Association of Washington, told The Epoch Times on July 23.

Individuals on the list were employed across a variety of state departments, including officials in the propaganda department, doctors involved in forced organ harvesting of imprisoned Falun Gong practitioners, prison guards, and officials at the “610 Office”—an extralegal secret police force dedicated to carrying out the persecution of Falun Gong. The diversity of departments represented on the list reflects how the CCP mobilized the entire state apparatus to suppress the faith, Lai said.

He said the association in Washington intends to submit more lists in the future.

“We believe this visa ban is a really powerful vehicle to curb violations of religious freedom of Falun Gong practitioners in China,” he said.

“In the last 20 years, the number of perpetrators is probably in the magnitude of tens of thousands across the whole country. So we plan to continue compiling the evidence and submitting their names to the State Department.”

Under Section 212(a)(2)(G) of the Immigration and Nationality Act, any person who serves as a foreign government official and is responsible for particularly severe violations of religious freedom is inadmissible for entry to the United States.

A state department official confirmed receipt of the list and said the department will take appropriate action in all cases, according to the Minghui.org statement. The official also said that a number of Chinese officials in recent years have been denied U.S. visas due to their role in persecuting Falun Gong practitioners.

There are various laws that bar the granting of visas to human rights violators, the official said, including laws that also deny visas to the spouses and children of perpetrators, according to the statement.

Lai said that while some perpetrators may have no plans to visit the United States, many are keen to send their children to live or study in the country.

“They really don’t want this path to be closed,” he said.

The recent news of the state department’s intensified efforts to tighten immigration checks on violators of religious freedom has already had a powerful impact in China, Lai said.

He said reports from Minghui.org indicate that some detention centers in China have recently removed photographs of local police officials from its walls, suggesting authorities are afraid of their names being exposed.

“We have to sanction them all, make it so that they can’t send their kids to colleges in the U.K., in the United States, in western countries, they have trouble flying and getting visas.

“If we could impact that with these sanctions individually without hurting the people of China, that would be ideal.”

Officials Involved in the Persecution of Falun Gong

Wang Zhiyuan, the founder and president of WOIPFG, told The Epoch Times on July 23 that he was heartened to see more attention paid to the non profit’s investigation effort.

The organization first started compiling names of perpetrators in 2003, as accounts of Falun Gong practitioners being tortured to death were brought to their attention. Through independent research, phone calls, talking to victims and their families, as well as informants within the regime, they collected and published the first list in 2004. The number of lists has since grown to 12, with more than 79,000 perpetrators identified.

Wang said that the human rights perpetrators have only two choices in front of them: change their behavior and report other human rights violations to the WOIPFG to make up for what they did, or meet with consequences for their misdeeds in prosecution.

The WOIPFG noted a number of officials who played a key role in the persecution.

On the list was Liu Yunshan, former head of the Publicity Department—the agency responsible for propaganda dissemination—who turned the state propaganda apparatus against the spiritual discipline since the start of the persecution in 1999.

A 2014 open letter from the Washington-based non profit Human Rights Law Foundation, addressed to Denmark at the time when Liu was on a four-state visit to Europe, stated: “[The persecution of Falun Gong] has occurred with the authorization, support, specific direction, and substantial assistance of Liu Yunshan, acting in concert with other high-level individuals in the Communist Party.”

The group said that Liu was responsible for “mass human rights abuses” through carrying out a “struggle campaign,” called “douzheng” in Chinese, aimed at eradicating the practice and forcing the practitioners to renounce their belief.

At the national conference convened to report on the “achievements” of anti-Falun Gong campaign in February 2000, Liu spoke highly of several labor camps, including the now notorious Masanjia Labor Camp, praising the facilities for “manag[ing] to obtain immense victories” in their handling of practitioners who persisted in their faith. He also ordered the rest of the facilities nationwide to follow suit.

Practitioners who were detained at the now closed Masanjia Labor Camp have recounted being brutally tortured by the guards, including being sexually abused.

Huang Jiefu, who was also on the list submitted to the state department, serves as the director of the China Organ Donation and Transplantation Committee and was the former deputy minister of China’s Ministry of Health.

As China’s spokesperson on transplant issues, Huang repeatedly denied allegations from international reports that the regime was forcibly harvesting the organs from imprisoned Falun Gong practitioners for transplant. He has maintained that since 2015, the nation has sourced its organs for transplant surgeries from voluntary donors.

Yet WOIPFG said that Huang’s claims did not explain the number of transplants conducted by Chinese hospitals.

Through Chinese media reports, WOIPFG in a 2018 report found that Huang had performed over 500 liver transplant surgeries in 2012 with only one of them using a donated organ.

The organization also noted that a doctor who worked at the First Affiliated Hospital of Sun Yat-sen University in Guangzhou Province, where Huang worked as a surgeon, had admitted to using Falun Gong practitioners as organ sources.

During their investigations, WOIPFG has identified 32 hospitals that sourced Falun Gong practitioners for organ transplant surgeries.

In a June ruling, an independent people’s tribunal, after a year-long investigation, concluded that forced organ harvesting in China has occurred on a ‘significant scale’, with Falun Gong practitioners being a main organ source.

“Forced organ harvesting is of unmatched wickedness—on a death for death basis—with the killings by mass crimes committed in the last century,” Sir Geoffrey Nice QC, chair of the tribunal, said on July 17 in delivering the judgment.