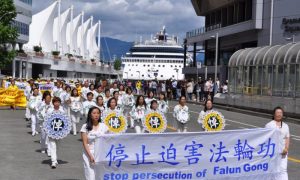 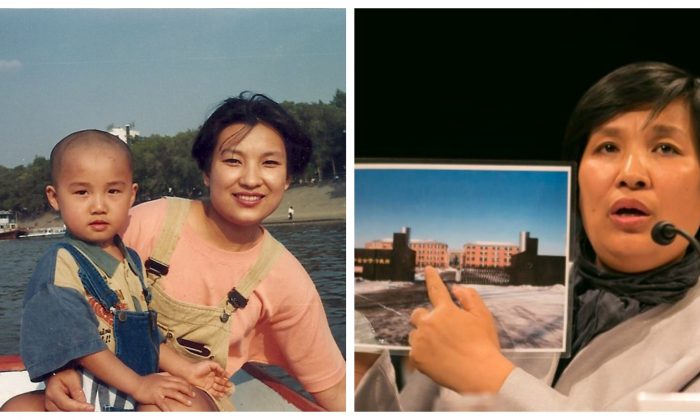 Yin Liping (L) and her son before the persecution against Falun Gong adherents began in 1999. (R) Yin Liping holds up a picture of Masanjia Forced Labor Camp at a hearing in Washington on April 14, 2016. (Lisa Fan/The Epoch Times; Minghui.org)
China Human Rights

‘The Notorious Masanjia’: One Woman’s Story of Torture and Sexual Violence in a Chinese Gulag

“Whenever I think of the notorious Masanjia Forced Labor Camp, my heart trembles,” said Yin Liping.

Masanjia Forced Labor Camp in China is known among Falun Gong adherents as a “dark den of evil” due to the vicious torture meted out by the guards.

It was at Masanjia that Yin ended up in September 2000. She had been detained and tortured in other labor camps but refused to be “transformed”—a term for forcing Falun Gong practitioners to give up the traditional meditation practice—so she was sent to Masanjia.

Masanjia specialized in transforming Falun Gong practitioners by any means necessary—including rampant sexual abuse and torture. Unknown numbers of practitioners were sent there in the years after the Chinese regime launched its persecution campaign against Falun Gong, also called Falun Dafa, in July 1999.

Many didn’t survive, or ended up disabled or insane from the torture.

For the first two weeks after arriving at the camp, Yin, then 32, was forced to listen to propaganda that slandered the spiritual practice from 5 a.m. until 2 a.m. every day. When that didn’t achieve the effect of transforming her, the physical torture began.

She was beaten, kicked, punched, and shocked repeatedly in sensitive parts with high-voltage electric batons by one of the guards.

“She started to shock me with two electric batons, on my face, neck, feet and hands. I was in extreme pain. I had a hard time breathing and my face kept twitching. I couldn’t stand up anymore and fell backward,” Yin said in an interview with Minghui.org after she escaped to Thailand in 2013.

“I was dragged back to the cell. When I regained consciousness, I found my hands, my face, neck and back were covered with burn marks and blisters. I was extremely weak. Seeing how badly I had been tortured, an old lady in the cell wept and said, ‘I don’t know if you can handle it. Few people can bear the torture. If you cannot, just write the statements they want.’”

Yin’s cellmate was referring to the so-called “three statements” that Falun Gong prisoners of conscience are pressured to sign as part of being transformed. They consist of a letter of repentance, a guarantee to never again practice Falun Gong, and a list of names and addresses of everyone they know who are practitioners.

Next came sleep deprivation, solitary confinement, and beatings by other inmates.

“They slammed my head against the wall, which caused my ears to ring loudly,” she said.

“When they got tired of beating me, they forced me to half squat down with my hands stretched out flat. They put needles under my wrists. If my hands dropped, they would pinch me. In less than two hours, my wrists were pinched so badly that blood flowed from them. If I moved my hands away from the needles, they would beat me with wooden sticks and slap my face.”

One day, Yin was dragged yet again to the office of division head Zhang Xiurong and pressured to sign the “three statements.”

“I refused,” she said. “Zhang and two guards beat and insulted me. She held me on the ground and cut my hair with scissors. Then she laughed wildly and said I looked like a mental patient.”

On April 19, 2001, when Yin had served over 15 months of her 18-month sentence, she and nine other Falun Gong practitioners who refused to be transformed were taken by bus to Zhangshi Men’s Labor Camp.

There, the women were separated, with each put in one room. Four men were already in Yin’s room. When she went down the hall to use the bathroom, she saw a large room with 30 men sleeping on the floor. Yin was afraid and wondered what she was doing in this place.

Yin asked the men to leave her room so she could sleep. A middle-aged man told her, “You want to sleep? No one is allowed to sleep without being transformed. One woman was ‘trained’ here for 18 days and not allowed to sleep. In the end, she became crazy.’”

Then Yin heard terrified screams from the hallway. She knew it was her friend Zhou Guirong and ran out to try and protect her, but the male prisoners attacked them both.

“The male prisoners repeatedly beat us. My right eye swelled because of the beating and my clothes were torn and stripped off. Zhou and I were both dragged back to our cells. I was beaten by four or five men and became disoriented. Finally, I was forced to lie flat on the bed. One man sat on me and beat me. I became dizzy and passed out,” she said.

“When I regained consciousness, I found three males lying next to me and their hands and bodies were all over me. Two stood between my legs, one was shooting a video and the other was watching the video. They kept talking dirty. They said dirty words and one of them kept saying, ‘Don’t pretend death. You have to renounce Falun Gong even if you are dead!’

“I couldn’t believe what I saw,” Yin said. “I vomited blood and there was blood all over.” She realized she had been videotaped while being gang-raped when she was passed out.

Meanwhile she could still hear Zhou screaming. She tried to get away from the men to go help her friend but one of them hit her in the head with a wooden clothes hanger.

“I suddenly felt warm liquid running down my face, but I struggled to get up. I had no concept of living or dying. Nothing could stop me. I smashed against the room’s door as hard as possible while the prisoners beat my body. I kept on calling her name, and then she rushed into my room. She held me up, and we ran to the door at the end of the hall.”

They were able to open the door, but then the men grabbed them and dragged them back to their rooms. They were allowed to sleep that night while four inmates kept watch.

The next day, the prisoners who had tortured Yin the night before came to her room again with a video camera and tried to transform her. When she wouldn’t cooperate, they beat her.

The guards also used electric batons to shock her nipples, genitals, and other sensitive body parts.

It went on like this for the three days that the women were held at the men’s camp. By the time they were taken back to Masnajia, they were not only seriously injured but utterly demoralized and humiliated.

Of the group of nine that were sexually assaulted at the Zhangshi Men’s Labor Camp,  Zhou Guirong and Su Juzhen later died from torture. Su first had a mental breakdown.

‘She Died in my Arms’

Yin was already weak when she arrived at Masanjia in September 2000.

She had been sentenced to 18 months for appealing for an end to the brutal suppression of Falun Gong, and at two camps before Masanjia she was tortured and forced to perform hard labor.

At Liaoyang Forced Labor Camp, her hair turned gray and her menstrual period stopped due to the grueling work, which included helping load eight tons of steel bars onto trucks in the daytime and binding artificial flowers at night until 2 a.m. Her weight plummeted from 165 pounds to 135 pounds, and she began vomiting blood regularly.

After finishing her first stint at Masanjia, Yin was sent back there twice more and the brutal torture continued. Both times, she was released early because she was on the brink of death.

At one stage, she was handcuffed to a bed and injected with unknown drugs for over two months at the rate of two bottles per day. As a result, she temporarily lost her vision and developed endocrine disorders, incontinence, and had blood in her urine.

Through all her years of illegal detention and abuse, Yin stood her ground, remained firm in her faith, and was never transformed.

After she fled to Thailand in August 2013, Yin subsequently gained refugee status in the United States in 2015. At a Congressional hearing on China’s use of systematic torture in its detention facilities in Washington on April 14, 2016, she recounted her story of the years of abuse at Masanjia, which was closed in 2013.

Yin told the hearing she witnessed the some of the sexual assaults and crimes described in the 2014 book “Vaginal Coma,” by former New York Times photojournalist Du Bin.” revealing the brutal sexual torture of female Falun Gong practitioners and petitioners detained

Holding up the book, she said, “Three toothbrushes were tied together, and inserted into and stirred up female private parts. I saw with my own eyes a group of men beating an elderly Falun Gong practitioner in the restroom. They forcefully inserted a broken broom stick into her private part.”

Tears ran down her face as she spoke. She said 30 Falun Gong practitioners she knew personally developed mental disorders from the torture and 10 died, either in prison or after they were released.

“Wang Jie, Zhou Guirong, and I had been through brutal and evil persecution. We promised one another that any one of us who survives will expose the persecution to the world. Today I’m speaking up for them, the forever voiceless victims.”