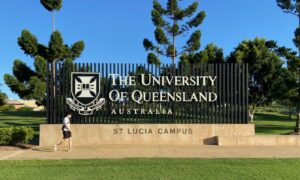 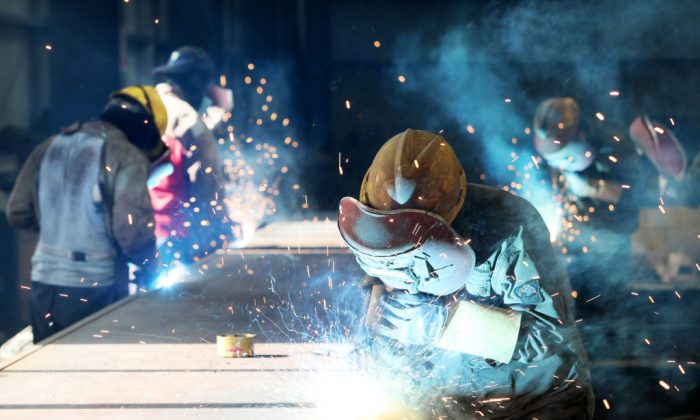 Workers cut steel at a factory in Huaibei, a city in eastern China's Anhui Province, on May 3, 2018. (AFP/Getty Images)
Chinese Regime

An increase in orders to South Korea’s shipbuilders has the nation’s steelmakers sounding the alarm about a recent influx of cheaper Chinese imports into the country.

The boost in demand by shipbuilders, especially for thick steel plates, resulted IN South Korea importing 149,488 tons of the plates in September, a monthly high for the year, according to an Oct. 18 article by Business Korea, an English-language business and financial magazine. Of that total, 84,236 tons originated from China, more than double what was imported in February.

POSCO, Hyundai Steel, and Dongkuk Steel, three major South Korean steelmakers, produced about 9 million tons of steel plates, of which 5.6 million tons went to the domestic market. Local shipbuilders received 60 percent of that, or about 3.36 million tons, in steel plates.

South Korean steelmakers are feeling the pressure to cut prices in the face of competition from Chinese rivals, who often sell at cheaper prices.

If Chinese steelmakers choose to engage in a price war with South Korean steelmakers, the latter likely will lose out. Chinese steel-plate imports into South Korea are set to increase, according to Business Korea, which suggested that South Korean shipbuilders are “highly likely to choose Chinese products over Korean ones.”

Hong Jeong-eui, head of the Trade Cooperation Office at the Korea Iron and Steel Association, said: “Chinese steelmakers have a production capacity about 15 times that of Korean steelmakers. Thus, if some of their products are exported to Korea, it will deal a big blow to Korean steelmakers.”

The Sino–U.S. trade war also is forcing China to escalate its steel production, according to Business Korea.

But at the end of September, Beijing announced that for the upcoming winter, it would loosen its previous air pollution targets: Instead of reducing PM2.5 levels by 5 percent in the Beijing–Tianjin–Hebei region as proposed in August, Beijing lowered the target to 3 percent.

PM2.5 refers to pollution particles in the air that are less than 2.5 micrometers in diameter.

The easing of pollution targets would allow steelmakers to increase their production—which, in turn, will help prop up the Chinese economy amid its economic woes.

The United States, the European Union, and Canada have set up anti-dumping tariffs against Chinese steel imports, it is difficult for the South Korean government to implement similar countermeasures, according to Business Korea.

“Korean government’s sanction on Chinese products may ignite friction between Korea and China, in terms of politics and diplomacy and lead the Chinese government to retaliate against Korean steelmakers that have moved into China,” Business Korea wrote.

South Korean conglomerate Lotte Group is a case of how the Chinese regime can retaliate against foreign companies if their nations have drawn the ire of Beijing.

In 2017, Beijing encouraged citizens to boycott South Korean products and stopped Chinese tourists from visiting South Korea, after Lotte agreed to offer land on its golf courses to host the United States’ THAAD anti-missile defense system. Lotte’s business in China subsequently fell dramatically, and the company eventually closed all its retail stores in China this August.

South Korea was a shipbuilding powerhouse before losing market share to China in recent years. Beijing supports its domestic steelmakers through subsidy programs and merger tactics.