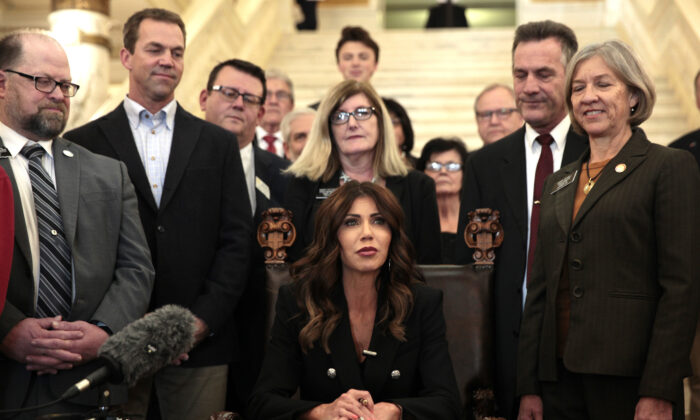 South Dakota’s governor on Feb. 3 signed legislation that bars athletes from competing on single sex sports teams if they are of the other sex.

Senate Bill 46 was approved by the state’s legislature before being signed by Gov. Kristi Noem, a Republican, at the South Dakota State Capitol in Pierre.

“This bill has been an important priority for a lot of people behind me and I appreciate all of their hard work in making sure that girls will always have the opportunity to play in girls sports in South Dakota, and have an opportunity for a level playing field, for fairness, that gives them a chance to experience success, go on, potentially play at a higher level, earn scholarships, perhaps play professionally and have a career,” Noem said before the signing.

The bill applies to sports teams on the K to 12 and college levels.

It states that “Any interscholastic, intercollegiate, intramural, or club athletic team, sport, or athletic event that is sponsored or sanctioned by an accredited school, school district, an activities association or organization, or an institution of higher education under the control of either the Board of Regents or the Board of Technical Education must be designated as one of the following, based on the biological sex at birth of the participating students: females, women, or girls; males, men, or boys; or coeducational or mixed.”

Single sex sports teams will only be allowed to accept participants who are of that biological sex.

The bill is primarily meant to prevent boys who claim to be girls from participating in girls’ sports, a growing trend across the country that’s triggered outcry because males have certain physical advantages over females. It is scheduled to take effect on July 1.

The bill was introduced at the request of Noem, whose attempts to convince lawmakers last year to alter a similar bill led to the bill dying.

Similar laws to the one that was signed by the governor have been enacted in multiple states, including Arkansas, Florida, and West Virginia.

Some groups involved with youth who describe themselves as transgender said South Dakota’s bill would have a negative effect.

“Bills like these are unnecessary and cruel, and we know the ugly rhetoric surrounding them is having a real impact on the mental health and wellbeing of one of our most marginalized groups of young people,” Sam Ames, director of advocacy and government affairs at the Trevor Project, said in a statement.