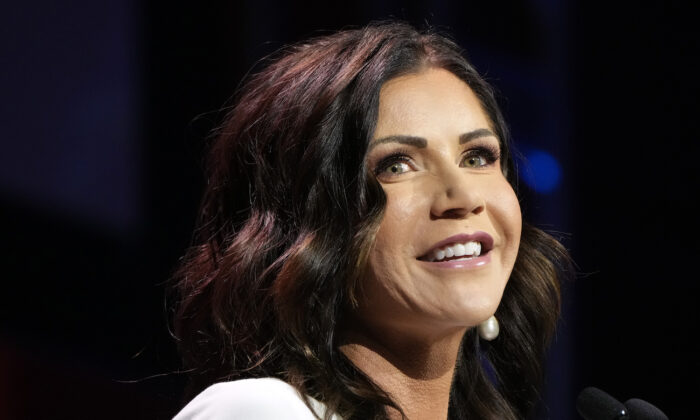 Athletes in primary schools and colleges in South Dakota will have to compete in sports with peers of their own gender if Gov. Kristi Noem signs legislation that lawmakers in both state chambers have passed.

South Dakota’s House of Representatives, in a 50–17 vote on Tuesday, approved the bill, Senate Bill 46.

No Democrats voted for the bill and 10 Republicans voted against it.

The state’s upper chamber passed the legislation in January with a 26–7 vote.

The bill says that any sports teams at schools must be based on the biological sex at birth of the participating athletes. If a team is designated a girls team, for instance, biological boys will not be allowed to participate.

It was introduced at the request of South Dakota Gov. Kristi Noem, a Republican.

“This is about fairness,” Noem said during a recent appearance on “Fox News Sunday.” “This is about making sure that our girls have a chance to be successful and to compete, to win scholarships, potentially go on to play professional sports beyond that. We want them to have the opportunity to do that.

“Title IX fought for that years and years ago and I’ve been doing this for years, which started, man, almost five years ago now in the sport of rodeo, where we protected girls’ events,” she added. “So now I’m bringing a bill to the legislature that will be the strongest bill in the nation in protecting fairness in girls’ sports, and I’m hopeful that my legislators will support it.”

A spokesman for Noem confirmed in an email to The Epoch Times that the governor will be signing the legislation.

Democrats and some groups said the new legislation will negatively impact youth who identify as a different sex than their biological sex.

The bill “will harm transgender kids, adding to a dangerous wave of violence against transgender and gender non-binary people across the country that is being fueled by misinformation, discriminatory laws, and divisive political talking points,” Cathryn Oakley, the Human Rights Campaign state legislative director, said in a statement.

The South Dakota House also passed House Bill 1005, which would require students to use bathrooms and locker rooms assigned to their biological sex.

Under the bill, students would be able to file a request for reasonable accommodation with school officials and may be granted the use of a single-occupancy bathroom or changing room.

That bill is heading to the state Senate.