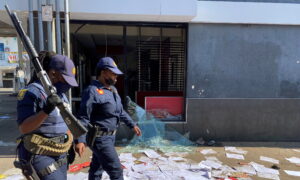 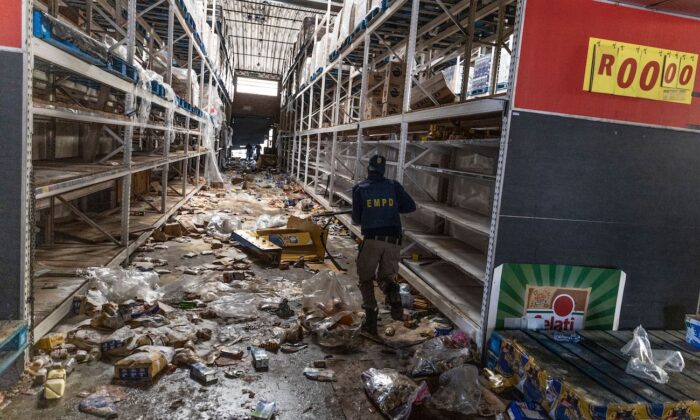 A member of the South African Police Services searches for looters inside the Gold Spot Shopping Centre in Vosloorus, southeast of Johannesburg, on July 12, 2021. (Guillem Sartorio/AFP via Getty Images)
Africa

South Africa Crisis Is a Warning to the West of the Dangers of Critical Race Theory: Former ANC Member

Recent civil unrest in South Africa—which has claimed over 300 lives—should serve as a warning to Western nations of the dangers of socialism, wealth redistribution, and affirmative action, warned a former member of the ruling African National Congress (ANC).

He said that despite the lofty goals of Critical Race Theory (CRT) and African socialism, the consequences would be the same—namely, more inequality.

CRT, a descendent theory of Marxism, has become a hot topic of discussion in the United States. The theory places “race” centre-stage in understanding how society works and argues that many institutions in the West are inherently oppressive or “racist.” CRT advocates call for policies to create more “equality” between different races in society.

In South Africa, policies grounded in principles such as “black empowerment” and equality began rolling out upon the ascension of Nelson Mandela to the presidency in 1994.

“As we have said before, affirmative action is corrective action. There is no other way of moving away from racial discrimination to true equality,” Mandela told Parliament.

The ANC leader followed up his promise with initiatives such as Radical Economic Transformation, Black Economic Empowerment (quota systems), and cadre deployment.

The latter, outlined in the 1997 document, The State, Property Relations and Social Transformation, was an initiative by the ANC to insert its own members into “all levers of power,” including the army, bureaucracy, judiciary, and media, etc.

“If you’re a party member, you get deployed into jobs. The idea is that the party should have people running every sector of society,” Louw explained to The Epoch Times.

“For example, in Australia, the (governing) party would have its member as the head of Qantas, the head of every government department, and every major corporation. You would have party members everywhere.”

This practice is prevalent in mainland China under the Chinese Communist Party (CCP), where all state-owned enterprises are headed not just by a chairman or CEO but by a party committee whose role is to ensure CCP policies are adhered to.

However, 20 years on, cadre deployment has been a key reason behind the rampant corruption that has crippled basic services and public utilities.

Institutions like public transport services, sewerage, hospitals, and the petroleum industry have been left in disarray. Electricity utility company Eskom, now struggles to keep the lights on and issues periodic warnings of blackouts or “load shedding.”

Despite these problems, a segment of super-wealthy business and political leaders have emerged. Current President Cyril Ramaphosa’s net worth, for example, is estimated to be over US$450 million. It has also been revealed he owns 31 properties.

Local South Africans, meanwhile, have responded with multiple “service delivery protests” every day. According to the Minister of Police Behki Cele, there were 909 protests in the six months from August 2020 to January 2021.

Upon his ascension in 2018, President Ramaphosa conceded that corruption was the cause behind the country’s economic struggles.

“Ramaphosa is saying: ‘This is now hurting us; we’ve got to do something about this.’ We’ve actually got to fix the cadre deployment system and put competent people in and fix the governance issues that we have,” Louw said, noting that the ANC had been losing votes at successive elections.

“Now, of course, what are they talking about? Ramaphosa is saying: ‘We have to remove all these bad, corrupt cadres that Zuma put there.’”

Former President Jacob Zuma, who served under former Presidents Mandela and Thabo Mbeki, was a major player behind the cadre deployment system and developed a network of loyalists that have challenged Ramaphosa.

Zuma’s presidency was scandal-ridden, with multiple accusations of corruption. In fact, the term “state capture” has become synonymous with him, which refers to the practice of weakening the function of government for private gain.

However, a major catalyst for the nation has been the apprehension, inquiry, and trial of Zuma for multiple corruption charges. Most recently, he was sentenced to 15-months imprisonment for contempt of court.

Louw says, however, that the message was loud and clear to Zuma’s factional allies.

“It wasn’t just about arresting Zuma, every other cadre in the country—and these were very powerful guys—realised that: ‘If they can get Zuma, they can get me. They’re going to come for me next,” Louw said, noting the similarities with Chinese leader Xi Jinping’s anti-corruption campaign in 2013.

“That’s why they hit back so hard. They were terrified that if Zuma went to jail, they would all go.”

The resulting violence and looting targeted the economic heartland of the nation, KwaZulu-Natal, and Gauteng provinces.

It is estimated that over 300 South Africans died, many being looters. Due to failures by the police, South African civilians resorted to forming militias to protect their properties and neighbourhoods.

Despite their differences, the core of the ANC—which rules with the backing of the South African Communist Party and Congress of South African Trade Unions—ultimately has its sights set on transforming the country via Radical Economic Transformation (RET).

“In a nutshell, the Zuma faction goes for the (Robert) Mugabe model. Just seize the wealth immediately and transfer the wealth from white to black. No matter how bad it looks,” Louw said.

Mugabe ruled Zimbabwe for nearly four decades and oversaw violent land seizures from white African farmers. His mismanagement sparked hyperinflation and brought the once “breadbasket of Africa” to economic collapse.

“Ramaphosa’s argument is: ‘No, we’ve got to do this gradually. We got to use the law to take wealth away. We transfer wealth, but we do it legally. We won’t have terrible scenes of people having farms seized violently. We don’t have any of that bad PR. We’ve got to do it, so the world doesn’t notice what we do,” Louw explained.

Warning for the West

Louw concedes that it is “terrifying” that socialism and Marxism are welcomed in Western institutions like universities.

“I worked at South African universities and in other universities, and it horrifies and terrifies me how young people really do think that socialism is good,” he said.

“When I was young, I thought so too. I was young and naive myself,” he continued. “But what we know is something more intense than that, and it’s a phenomenal naivety.”

He added that a similar undercurrent was present in the CRT and Black Lives Matter (BLM) movement that has emerged in the past year, where the prevailing narrative is of blacks being oppressed by whites.

“The South African government’s policies and CRT do share many of the same roots, and share the same obsessions with socialism and race. I believe that the failures of today’s South Africa should serve as a warning to Americans about the dangers of where CRT and BLM might lead.”