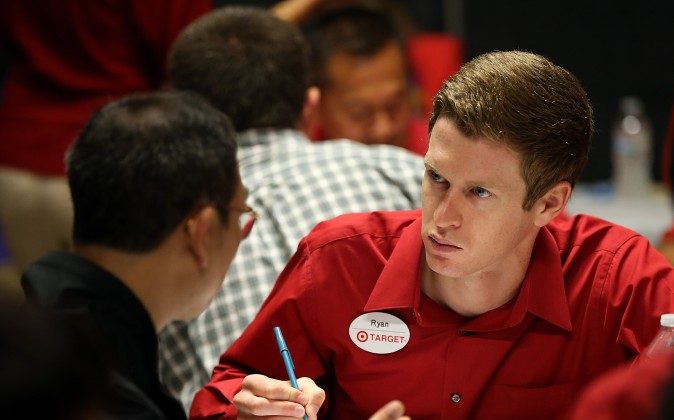 A Target employee interviews a job seeker during a job fair at a Target retail store in San Francisco on Aug. 15, 2013. (Justin Sullivan/Getty Images)
US

May 2016 will bring $1 more an hour for Target Corporation employees across the United States, according to a Reuters report citing sources with direct knowledge.

The increase will bring the retail giant’s minimum hourly wage to $10—their second raise in just one year, the sources said who requested anonymity.

It’s the second time Target has followed in the footsteps of Wal-Mart, who has also just raised their minimum wage.

In the report, Reuters states it’s the second time Target has followed in the footsteps of Wal-Mart, who has also just raised their minimum wage. In February of this year, Wal-Mart announced their base pay would hit $10 an hour, which was just recently implemented.

Last April, Target jumped to $9 an hour, up from $7.25; a similar announcement made just weeks prior by Wal-Mart.

The raise will also impact employees already making $10 hourly or more, entitling them to an annual merit raise and a pay-grade hike.

Although declining to confirm the increase, a spokesman for the retailer told Reuters:

“We pay market competitive rates and regularly benchmark the marketplace to ensure that our compensation and benefits packages will help us to both recruit and retain great talent.”

The spokesman said the company refuses to disclose pay details of its roughly 341,000 employees.

Target Corporation is expecting an annual gross margin rate of around 30 percent for 2016.