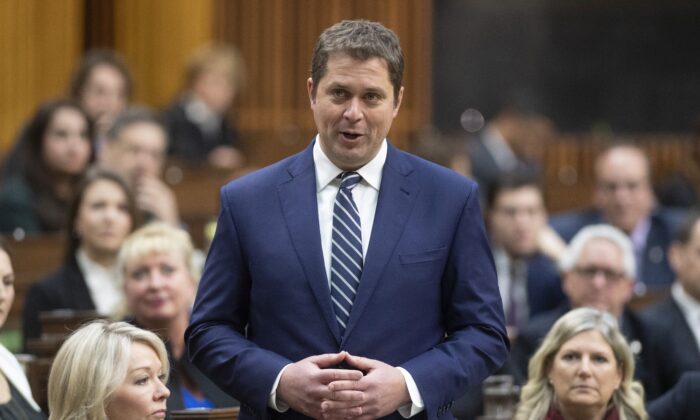 Andrew Scheer announces he will step down as leader of the Conservatives in the House of Commons on Dec. 12, 2019. The contest for a new leader began this week. (The Canadian Press/Adrian Wyld)
Canada

One of the three candidates Brad Trost announced on Twitter that he would support for leadership of the Conservative Party is Richard Décarie, a political aide under former Tory leader Stephen Harper while in opposition, who helped run Harper’s Quebec operations.

Trost, a former Saskatchewan MP and Conservative Party leadership candidate who had the support of the social conservatives, says he doesn’t want to name the other two because they haven’t yet announced their candidacy, but the reason he supports them and Décarie is that they’re “good communicators with strong principles.”

“Those are the two things I look for in candidates: good, solid principles and the ability to clearly articulate their message. Those are the two most important things,” he said in an interview.

The leadership race officially began this week, with the new leader to be elected at a convention in Toronto on June 27. Some of the more high-profile names among those announcing or widely said to be considering running are current MPs Pierre Poilievre, Erin O’Toole, and Marilyn Gladu; former cabinet ministers Rona Ambrose and Peter MacKay; and former Quebec premier Jean Charest.

In the wake of the Conservatives’ loss under Andrew Scheer’s leadership, and his handling of media questions about abortion and same-sex marriage, some commentators have said that a social conservative platform is no longer viable and that, if the party is to succeed, the next leader should not be a social conservative.

Trost, an outspoken advocate for social conservatism, disagrees with that opinion.

“As far as whether or not a social conservative is a guaranteed loser, let’s be blunt here: Andrew Sheer was a very, very poor representative of social conservativism. He did not want to defend the policy, he did not support it directly, he wanted to walk away from his previous social conservative stances, and yet he still managed to win 121 seats, come first in the popular vote,” he said.

“He didn’t beat Trudeau directly, but he came within an inch of winning the government,” he adds, noting that Scheer didn’t win because his campaign was “inarticulate” and “poorly run,” not because of social conservatism.

“If you can do this well with a poor campaign, think what a well-run social conservative campaign could do.”

Trost also disagrees with the opinion that the Tories’ poor showing in Ontario was because of the party’s climate change policy.

“I have been looking at some polling after the election, and it clearly wasn’t the climate change issue that cost the Conservative Party in Ontario—it was lack of having any sort of substantive vision that people were attracted to,” he said.

He said the province’s sex-ed program was the second most important issue that came up among voters who were considering voting conservative.

“What does that tell you about where the future of the Conservative Party is? It isn’t where the media commentators say it is. It’s where door-knockers find support when they go door to door,” he said.

Trost cites a recent Abacus poll that asked Tory supporters and potential supporters what would most attract them to the Conservative Party, and respondents said their top issue was economy-related: lower taxes and a clear economic plan.

“And among core conservative voters, those positions were even more overwhelming,” he said.

“We could make an appeal to voters who’ll never vote for us ever, but why? Why not actually stick with our core, underlying beliefs? Because politics isn’t just about power. Politics is about standing for what you believe in.”