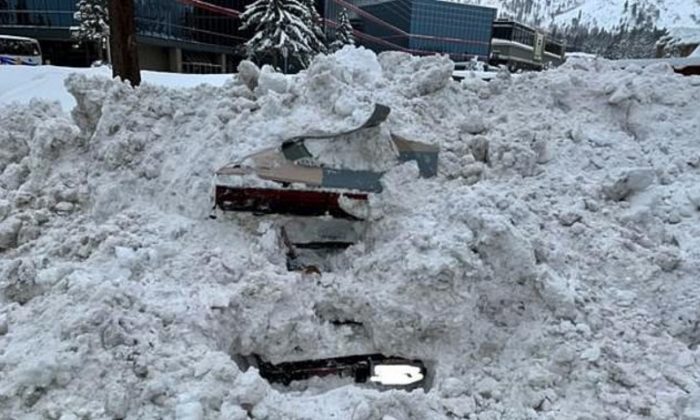 A snowplow struck a car that was completely buried by snow in South Lake Tahoe, California, on Feb. 17, 2019. Unbeknownst to crews, there was a woman inside. (City of South Lake Tahoe)
US News

Crews plowing the snow-covered streets of South Lake Tahoe, Calif., discovered a woman trapped in a car completely buried under a massive mound of snow.

The 48-year-old occupant of the vehicle was coping after spending between four and five hours trapped in the car on Feb. 17, according to city spokesman Chris Fiore, who spoke to the Reno Gazette-Journal.

“With that much snow piled on top of the car,” Fiore said, “if the snowplow hadn’t hit the back of it we could be having a much different conversation—she could have suffocated.”

Police believe the woman was homeless and living in her car.

“Judge for yourself with the amount of snow on top of that car,” Fiore told the paper. “It could have been days that she was there.”

The incident took place following a major multi-day snowstorm that dumped several feet snow in and around South Lake Tahoe.

“One of the biggest issues we’ve had this winter is illegally parked cars,” said Ray Jarvis, Public Works Director, according to KOLO-TV. “They don’t just delay the snow removal process; they’re dangerous for everyone involved.”

This is Tony—our 5’10” Terrain Parks Day Lead Extraordinaire. This is also the snow bank in C Lot… How many feet (or Tonys) tall do you think it is? pic.twitter.com/RlJ3K63LyS

Fiore told the Gazette-Journal that neither the plow operator nor the police officers who arrived on the scene to help dig out the illegally parked car initially had any idea there was anyone inside. They only realized someone was trapped in the vehicle when they saw a hand pressed against the window.

The woman also had no cell phone to call for help, she was unable to open the windows, and her car battery was dead.

It’s been quite a month for Lake Tahoe area resorts. Squaw Valley Alpine Meadows has received 557 inches of snow so far this season, which is more than 46 feet.
Read more here: https://t.co/dZ5QweSEw5

“We say this all the time, but it is so important to get cars out of snow removal areas and for everyone to be careful using vehicles during major snow events,” Fiore told KOLO-TV. “Being inside of a buried car, or starting a car buried in snow could have deadly consequences.”

South Lake Tahoe Police Department Lt. Shannon Laney said in his 20 years on the force, he had never before come across a person stuck in a completely snowed-in car.

“It’s a first for me, but we also haven’t had storms that dump this much (snow) this fast either … it’s a unique winter for us,” Laney told the Gazette-Journal.

Fiore added it’s important for people not to neglect their vehicles in snowy conditions.

“This is why we keep urging cleanup,” said Fiore. “When it’s clear out, it’s tempting to want to forget about the snow and get out of the house. Spending a few minutes clearing snow from your roof, cleaning icicles, can save you major headaches down the road.”