China's First-Quarter Smartphone Sales May Halve Due to Coronavirus: Analysts
0 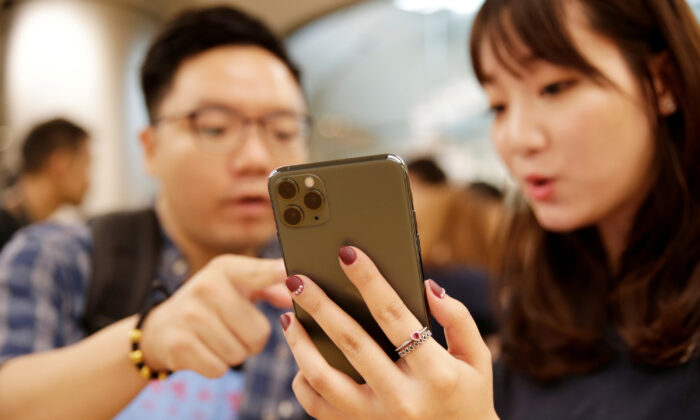 A customer touches an Apple's new iPhone 11 Pro Max after it went on sale at the Apple Store in Beijing, China, on Sept. 20, 2019. (Jason Lee/Reuters)
China Business & Economy

SHANGHAI—Sales of smartphones in China tumbled by more than a third in January, government data showed on Feb. 24, in a sign of how the coronavirus outbreak is hurting consumer demand.

Mobile phone brands shipped a total of 20.4 million devices that month, down 36.6 percent from 32.1 million in January 2019, data from the China Academy of Information and Communications Technology showed.

China’s smartphone market has been shrinking for a number of years as demand became more reliant on consumers replacing existing handsets than buying new ones. However, January’s drop was far larger than was seen in the same month last year, when sales fell 11.4 percent.

For early 2020 analysts had predicted a fall of this magnitude. Research firms IDC and Canalys forecast earlier this month that shipments would drop roughly 40 percent in the first quarter as the virus outbreak hurt demand and sparked supply chain issues.

Last week Apple Chief Executive Tim Cook wrote a letter to investors warning it would not meet its initial revenue guidance for the current quarter due to demand issues, and the coronavirus’ impact on suppliers.

Foxconn, Apple’s most important partner, has yet to fully resume work across its plants in China, though some of its facilities are operating at partial capacity.

Apple meanwhile shut its branded stores across China, following similar moves by most other major retailers in the country.

Earlier this month Xiaomi CEO Lei Jun unveiled the company’s new line of flagship devices via an online livestream, in lieu of a live audience.

In the stream, he thanked Xiaomi’s suppliers for helping the company in the run-up to the release and warned consumers that there might be some delays in delivery.

China’s smartphone brands are planning to release a range of 5G-enabled phones this year in hopes of reviving growth in the sector.

The bulk of the drop stems from Android brands, which collectively saw shipments decline from 29.9 million units in January 2019 to 18.1 million.

Shipments of Apple devices held steady at just over 2 million.

Analysts say that despite Apple’s struggles in China recently, the iPhone 11, released late last year, remains one of the best-selling 4G phones on the market in China. That bodes well for its first 5G phone, expected to arrive in autumn 2020.

IDC said in December, before the virus caused China to enter a state of semi-quarantine, that it expected phone shipments in China to return to growth in 2020.

By Josh Horwitz and Brenda Goh