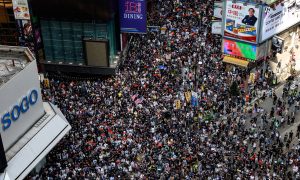 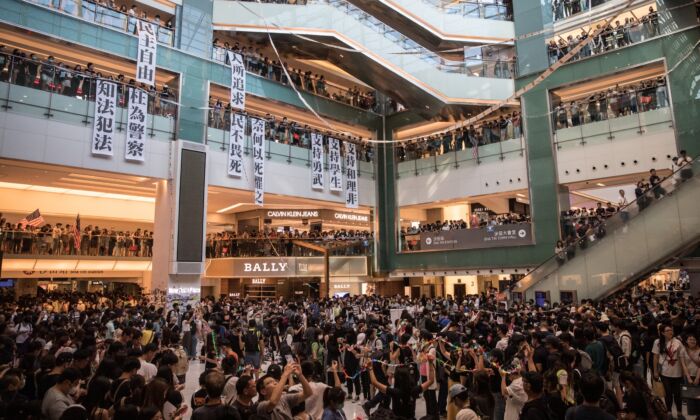 Hong Kong pro-democracy protesters sing songs and chant slogans during a rally inside a shopping mall in Sha Tin on Sept. 22, 2019. Pro-democracy protesters have continued demonstrations across Hong Kong, calling for the city's Chief Executive Carrie Lam to immediately meet the rest of their demands, including an independent inquiry into police brutality, the retraction of the word “riot” to describe the rallies, and genuine universal suffrage, as the territory faces a leadership crisis. (Chris McGrath/Getty Images)
HK Current Affairs

The 16th consecutive week of demonstrations in Hong Kong was marked by more violent confrontations between police and protesters.

The demonstrations began initially in opposition to an extradition bill that would allow the Chinese regime to transfer individuals to face trial in mainland China. Many saw as the bill as an example of China’s creeping interference in Hong Kong, which returned to Chinese rule in 1997 under a “one country, two systems” formula intended to guarantee freedoms that aren’t enjoyed on the mainland.

While the Hong Kong government announced on Sept. 4 that it would formally withdraw the bill, many continue to call for the government to respond to their other demands, first raised in June. The newer demands include an independent inquiry into police use of force, genuine universal suffrage, and the exoneration of all arrested protesters.

On Sept. 22, protesters gathered inside two shopping malls, the New Town Plaza and Citylink Plaza, in the Sha Tin district, to call for a boycott of businesses seen as pro-Beijing or pro-government. They also sang songs and chanted slogans.

Some protesters later removed a Chinese national flag from the flagpole outside the Sha Tin Town Hall before bringing it inside the New Town Plaza, where they trampled on the flag. After a protester spray-painted the flag black, another took it outside and threw it into the nearby Shing Mun River.

A Chinese law forbidding anyone from damaging the national flag has been adopted in Hong Kong laws; violators face up to three years in prison and a fine of 50,000 HK Dollars ($6,380). On Sept. 21, local police arrested a 13-year-old protester and charged her with “insulting national flag.” Days earlier, a 22-year-old protester was arrested for burning a Chinese flag.

Some protesters then began directing their anger at the local Sha Tin metro station, where a group destroyed ticket vending machines and entrance gates. In recent weeks, the Mass Transit Railway (MTR) transit authority has been the subject of protesters’ ire, after the company began shuttering stations in advance of protest events.

Hundreds of riot police arrived quickly and used pepper spray to disperse protesters from the station, as well as the New Town Plaza mall.

Protesters spilled water, oil, and liquid soap on the ground to prevent police from advancing, and moved steel barricades and metal trash bins to block elevators. Police made several arrests.

At about 5:30 p.m., most protesters were forced out and set up makeshift barricades on nearby streets to block police. Again, officers fired tear gas to disperse the demonstrators.

The MTR soon closed down Sha Tin and several nearby stations.

Near the Prince Edward metro station at around 8 p.m., where many had gathered to complain about police storming the station and beating passengers on Aug. 31, police arrested a middle-aged man and took him to the nearby Mongkok police station. Many protesters were angry about the arrest, saying the man hadn’t shown any aggressive behavior.

The gathering moved to the police station, where police fired tear gas without warning. Nearby, some protesters lit trash on fire on the streets.

Earlier in the day, protesters attempted to block traffic at the city’s international airport.

The airport authority began restricting entry, only allowing those with flight tickets showing departure times within 24 hours and valid travel documents to enter the airport terminals. Some shuttle buses that connect city areas with the airport were halted.

Protesters also disrupted an event on Tsing Yi island celebrating the anniversary of the Chinese regime’s founding, where Patrick Nip Tak-kuen, the city’s secretary for constitutional and mainland affairs, was speaking.

After heckling Nip, protesters placed barriers to prevent his car from leaving after he had finished his remarks. Riot police arrived about 20 minutes later, and protesters quickly fled.

On Sept. 21, police fired tear gas to disperse protesters during a police-approved march in the Tuen Mun district.

Crowds in the thousands began to gather under a sweltering sun as early as 2 p.m. for an authorized march scheduled from 3 p.m. to 5 p.m. But police fired sponge grenades to disperse people about an hour into the protest, forcing the event organizer to cut short the event.

At least three medics along with a number of protesters were arrested in ensuing chases with the police. In the Yuen Long district, where protesters had gathered to remember the two-month anniversary of a mob attack on passengers inside a nearby metro station, police pepper-sprayed two elderly men in the face. They are part of the “Protect Our Kids” group, who frequently stand between police and protesters during clashes, hoping to de-escalate the confrontations.

Violent clashes between pro-Beijing and pro-democracy crowds broke out elsewhere in the city.