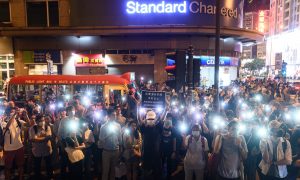 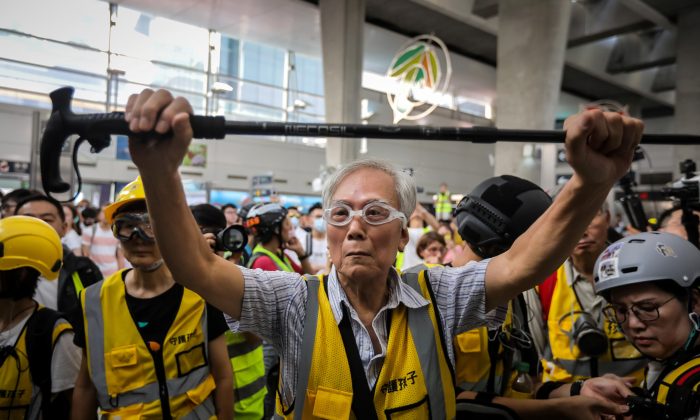 "Grandpa Wong" (C), 85, shielding protesters from the police by holding his walking stick up, along with other "Protect Our Kids" volunteers in the Tung Chung district in Hong Kong, on September 7, 2019. (VIVEK PRAKASH/AFP/Getty Images)
HK Current Affairs

HONG KONG—A planned protest at Hong Kong’s airport was deterred on Sept. 7 due to a heavy police presence and trains and buses in the area being shut down.

As the day worn on, police began to withdraw from the area of Tung Chung. A crowd started to gather, applauding their retreat and chanting slogans.

Suddenly, the police charged toward the crowd after someone threw some rubbish into their ranks, cornering a group of youngsters at an elevator where they were unable to escape.

Several elderly people wearing yellow vests were on the scene, pleading with the police to be lenient. Several arrests were made and eventually, the crowd dispersed.

The ones in yellow vests are actually parents and elders who are part of a group “to protect the youth.” They stand between police and protesters during clashes, hoping to de-escalate the confrontations. They shout at the police with megaphones and tell them to calm down when tensions run high, and pass out water and conduct first aid if needed.

Facilitator of the group and pastor of the Good Neighbor North District Church, Roy Chan Hoi Hing told The Epoch Times that he feels the protesters’ values align with his faith.

“My belief is that God tells us to give protection and love to care for the youngster and the protester because they are doing something to fight for justice, fight for freedom,” said Chan on Sept. 7. “This is very matched with the religions.”

Chan said many elderly and parents have expressed to him that they wish to show their support for the protesters.

The group calls themselves “Protect the Kids,” and can be distinguished by their yellow vests.

“We’ve got an 85-year-old, Uncle Wong,” said Chan. “He’s always telling the police, ‘don’t do that…don’t fight with the children.”

Chan said that usually, when there is a mass demonstration, 40 to 60 people in “Protect the Kids” will show up. They are split into teams of roughly 7 members to mediate during dangerous situations and look out for the youth.

Chan also asked for support from the international community.

“I ask for help from the U.S., maybe all of the Europeans, and so on, to make a big pressure on the Chinese government to give freedom and justice to the Hong Kong people,” he said. Hong Kong was handed from British to Chinese rule in 1997, with the express guarantee that it retain its autonomy and freedoms not granted in the mainland.

The extradition bill that sparked the protests, which would have allowed the Chinese regime to transfer individuals for trial in Chinese courts—where there is no rule of law—drew widespread concern that it would be the final straw in the Chinese Communist Party’s encroachment over Hong Kong affairs.