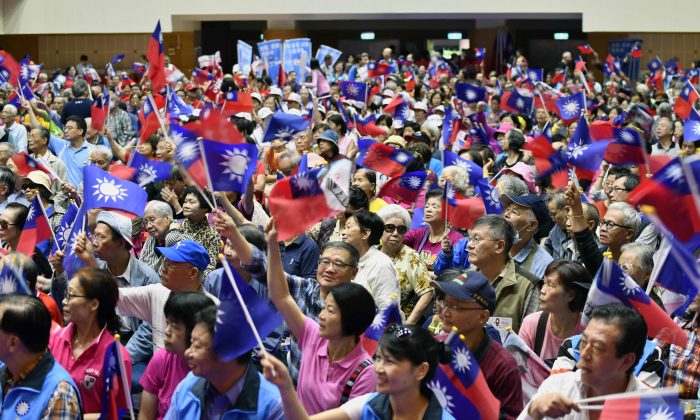 TAIPEI, Taiwan—Six U.S. senators have written a letter to Secretary of State Mike Pompeo and other national-security officials in the Trump administration to express concern about Beijing’s meddling in Taiwan’s recent elections.

The letter was also addressed to Secretary of the Treasury Steven Mnuchin, Director of National Intelligence Dan Coats, and FBI Director Christopher Wray.

“Allegations such as those surrounding Taiwan’s recent elections must, therefore, be pursued with seriousness and urgency…We encourage your departments to do all you can to support Taiwan in investigating these allegations and taking necessary action in response,” they continued.

The Kuomintang (KMT), the current opposition party which is known for its Beijing-friendly platforms, won a landslide victory. The party took many seats from the Democratic Progressive Party (DPP), which has historically advocated for formal independence from mainland China. However, some DPP politicians, including current president Tsai Ing-wen, hold a more moderate position and prefer the status quo in relations with Beijing.

While Taiwan is a de facto country with its own constitution, democratically elected government, currency, and military, Beijing views the island as a renegade province that must be united with the mainland, by force if necessary.

Beijing has tried to manipulate public opinion among Taiwanese in support of the idea of unification with mainland China. It seeks to achieve this through conducting favorable business deals with cities and counties under the KMT’s jurisdiction, while supporting pro-Beijing candidates to win elections.

Strong public support for unification, Beijing believes, could be the basis of its “legitimate” takeover of Taiwan, whether by non-violent or military means.

The letter mentioned several ongoing investigations by Taiwanese authorities related to Beijing’s meddling in the latest elections, including 33 cases of illegal campaign contributions from Chinese entities—a violation of Taiwan’s Political Donations Act and the Act Governing Relations Between the People of the Taiwan Area and the Mainland Area—and CCP-linked individuals allegedly bribing or coercing voters.

In terms of disinformation, the letter pointed out allegations by Taiwan authorities that Beijing spread “false information through social media and messaging platforms, including Facebook, Line, and the online bulletin board, PTT.”

“Some [Taiwanese] candidates have even claimed to possess evidence showing that these disinformation campaigns originated from mainland Chinese IP addresses,” according to the letter.

The Epoch Times has previously documented such efforts to meddle in the recent elections, showing how Beijing used social media to spread fake negative news about certain political candidates.

The senators concluded, “If [allegations of election meddling were] true, CCP interference in Taiwan’s elections would be deeply concerning not only for Taiwan’s future, but also for fellow democracies around the world where the CCP may choose to interfere.”

Joseph Wu, Taiwan’s Minister of Foreign Affairs, when asked by journalists about the U.S. senators’ letter before attending a meeting at Taiwan’s parliament, expressed gratitude to the senators for their support for Taiwan, according to Taiwan’s government-run Central News Agency. Wu added that U.S. support of Taiwan has “shined a light on freedom and democracy in Asia.”

Wu also said Taiwan will continue to improve ties with the United States, and expressed hope that the island could be a “positive force in the peaceful and open Indo-Pacific region.”

The same concerns about Beijing’s meddling in Taiwan’s elections were raised by U.S. Rep. Ted S. Yoho (R-Fla.) in November, when he posted a statement on his official website.

“Taiwan’s vibrant democracy and upstanding international conduct are qualities the Communist Party should aspire to, rather than undermine,” he wrote.