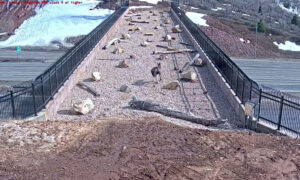 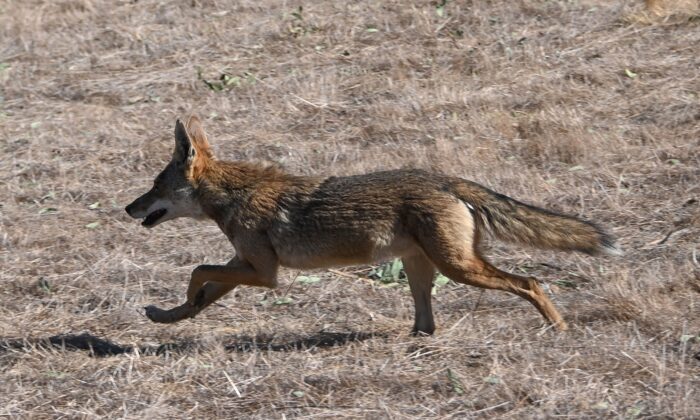 A coyote runs from a wildfire in Chino, Calif., on Oct. 27, 2020. (Robyn Beck/AFP via Getty Images)
Southern California

A multi-year project by nonprofit environmental conservation group Laguna Greenbelt Inc., which aims to help preserve wildlife in one of the last remaining large, consolidated wilderness areas in coastal Southern California, has been making significant progress.

The goal of the Irvine-Laguna Wildlife Corridor is to create a six-mile corridor that links 22,000 acres of natural land on Laguna’s coast to the 150,000 acres of wilderness near the Santa Ana Mountains, allowing wild animals to travel between the habitats.

Norm Grossman, president of Laguna Greenbelt, said the effort is “critical for our region and the state.”

“The 22,000 acres sounds like a lot, but to maintain a viable population, it just isn’t enough,” Grossman told The Epoch Times. “We have to have that connection to the Santa Ana mountains. … Decades of urban development have cut off the coastal wilderness from the rest of the landscape.”

While ground was broken for the project in 2018, planning began back in the ’90s.

In collaboration with FivePoint, a California community development company, the City of Irvine, and Laguna Greenbelt, construction of a central portion of the corridor is currently underway, while other specific challenges are being addressed.

The Need for Biodiversity

“People love these parks for many reasons, including their beauty. … Their beauty also comes from biodiversity that is intrinsic in the natural ecosystem,” Grossman says.

In order to foster biodiversity, larger animals like bobcats, grey foxes, and coyotes need more space to hunt; they need the ability to move between the coast and the foothills to create a more robust ecosystem.

He noted previous studies that indicate bobcats in the region are already exhibiting the effects of genetic isolation.

“So far, it’s not like anything has disappeared, but the numbers are going down,” he said.

The 22,000 acres, which are preserved by the Natural Community Conservation Plan and the Habitat Conservation Plan, also provide a home for rare species such as the long-tailed weasel, California gnatcatcher, and Orange-throated whiptail.

“If we only have coyotes and bunnies, we are losing many of the species that help maintain the vast and complex web of life in the coastal wilderness parks,” he said. “This affects all aspects of the ecosystem, from plants to leaf and soil microbes, to insects and mammals.”

As a result, the healthy balance of the ecosystem could be thwarted, resulting in a proliferation of rodents, skunks, and possums.

“The more biodiversity that exists in the system, the more productive a system is, and the better a system can recover from disastrous events such as drought, flood, [and] fire,” he said.

While Grossman believes the corridor can offer a viable solution for the problems faced by local wildlife, one of the project’s biggest challenges is a dark, 1,100-foot tunnel beneath the 405 and Interstate-5 freeways interchange.

The bend in the middle of the tunnel obscures the light from each end, the walls are covered completely in graffiti, and homeless individuals often stay in the area. (During a visit on June 21, the tunnel was vacant, but the ground was covered with feces.)

All of these factors contribute to a passageway that’s not conducive to animal movement, thereby contributing to a monoculture that could cause more harm to the environment. Monocultures, Grossman explained, are susceptible to diseases that can ravage an entire population.

“There is also standing water inside the tunnel from time to time, and animals such as bobcats dislike walking through standing water,” Grossman said.

What’s Next for the Project

Grossman, a board member of Laguna Greenbelt since 1984 who also spent nearly three decades on Laguna Beach’s planning commission, has a vision for the six-mile strip that’s informed by his longstanding passion for the environment.

His ideal corridor includes a robust habitat that offers nests, food, water, hiding places, and mates for wildlife as they make their way from the Cleveland National Forest to the coast and back.

Ongoing data collections, such as an 18-month camera monitoring project that concluded in 2019, would be necessary to monitor efficacy. He’d also like to see a stream of funding that allows a community of people to protect and manage the corridor.

As for the unlit, graffiti-coated tunnel, Grossman would advocate for lighting modifications, a mechanism to remove the standing water, and a combination of fencing and law enforcement to stave off homeless populations.

However, for the entire project to reach completion, he says the cities of Laguna Beach and Laguna Woods, landowner The Irvine Co., the County of Orange, California Department of Transportation, and the state would have to support the effort.

Grossman acknowledged that the corridor he imagines would likely expose people to wildlife and “a thriving wilderness environment [and] people have different comfort levels with that.”

He suggested more education about co-existence in a natural landscape would be beneficial to people in the long run.

“We need to remember that people are not separate from nature, but part of it, and people have a responsibility and privilege in caring for our natural habitats and wilderness neighbors,” he said. “Those who enjoy and live in the coastal wilderness parks don’t want to see them degrade or suffer—they want to see them improve.”

“The concept and purpose of the corridor is just now reaching the general public. Public support will be critical in bringing this project to fruition.”

The Beauty of Laguna’s Open Space

Grossman has a unique appreciation for the natural splendor of south Orange County.

Previously, he spent most of his time in urbanized environments like San Gabriel Valley, Los Angeles, and the San Fernando Valley. For him, the concept of environmental preservation and wildlife protection was abstract—“something glimpsed on vacations and in publications,” he said.

But the first time Grossman saw the plethora of open space alongside Laguna Canyon Road in the late 1970s, he fell in love.

“I was amazed at how open everything was. … I just wasn’t used to open space,” he said.

“What struck me at the time, and still stays with me, is how quickly the urban environment drops away—no more than a five-minute walk into nature. One of the few positive outcomes of the recent pandemic is that this need for nature has become more and more obvious to the general public.”