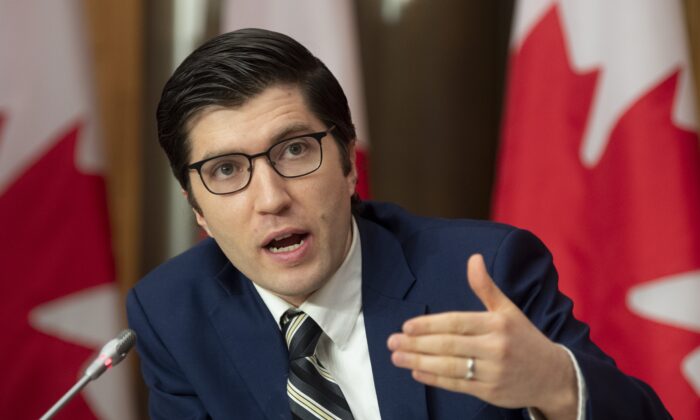 Conservative MP Garnett Genuis responds to a question during a news conference in Ottawa on Nov. 26, 2020. (The Canadian Press/Adrian Wyld)
Canada

The 2016 publishing deal with a communist Party-controlled company that printed Liberal Leader Justin Trudeau’s personal memoir in China raises concerns not only from an ethics perspective but also in the context of national security, a Tory candidate says.

“We are very concerned about the fact that the Prime Minister of Canada would have a personal publishing deal with a Chinese state-owned and controlled company,” Conservative candidate Garnett Genuis told NTD Television, The Epoch Times’ sister media.

“This means that he is dependent on that company, and indirectly on the Chinese government in terms of royalties, for his personal financial situation,” said Genuis, who is seeking re-election in the riding of Sherwood Park–Fort Saskatchewan and is his party’s shadow minister for human rights.

The Epoch Times asked the Liberal Party for comment but didn’t hear back.

The Globe and Mail reported on Sept. 14 that Trudeau’s Canadian publisher HarperCollins struck a deal with Yilin Press of Nanjing, China, in 2016 to republish Trudeau’s memoir “Common Ground” in Chinese, under the title, “The Legend Continues.’”

The parent company of the publisher is Jiangsu Phoenix Publishing and Media, a state-owned enterprise that takes orders from the propaganda department of the Jiangsu provincial Communist Party committee.

Genuis says this relationship between a Chinese Communist Party (CCP) state-owned company and the prime minister prompts questions of both ethics and national security.

“Is this a possible mechanism of influence over the Prime Minister of Canada?” he said.

“This is very clearly an attempt by the Chinese government to establish a personal relationship with a foreign head of state that advances their interests.”

On Sept. 14, Conservative candidate Michael Barrett wrote to federal ethics commissioner Mario Dion, asking for confirmation as to whether Trudeau had disclosed the book deal to him “at any point since 2016.” Barrett said the book deal was made at a time when the Liberal leader was actively pursuing a relationship with Beijing, including a free trade deal and joining the Asian Infrastructure Bank.

“Subsequently Mr. Trudeau has faced many important decisions regarding Canada’s relationship with China including whether to ban Huawei from Canada’s 5G network, choosing to partner with a Chinese state enterprise on the development of a COVID vaccine, responding to China’s genocide against the Uighurs, and the crackdown on Hong Kong,” he wrote.

Barrett added that Trudeau could possibly be in breach of Section 7 of the Conflict of Interest Act on preferential treatment, as well as Section 21, under which he should have recused himself on decisions related to the Chinese regime.

However, Trudeau said he played no role in the deal when asked by a reporter during an election campaign stop in Richmond, B.C., on Sept. 14.

“All the handling of the international editions of my book was done entirely by the publisher,” he said.

“All of the profits from that book go to the Canadian Red Cross. I don’t see a single penny, and I have nothing to do with where it gets translated or sold.”

When pressed about whether clearance was sought from Dion, Trudeau didn’t answer directly, but said “the ethics commissioner has cleared all my sources of income, many times.”

Genuis said the issue of Beijing’s influence on Canadian politicians is timely, as Conservative candidates are seeing attempts by the regime to actively interfere in the federal election, working behind the scenes to influence who gets elected in Canada.

“We see the deplorable efforts of the government of China to interfere in Canada’s election, to try to prevent the election of Conservative candidates in support of the election of Liberal candidates,” he said.

“This is something that we’ve been warned about many times, and the government has failed to take it seriously.”

Chinese state-owned media have published hostile reports against the Conservative Party and leader Erin O’Toole, who has taken a strong position against the CCP, including defending human rights in China.

Genuis said his party’s policies to curb foreign interference, particularly on protecting Chinese-Canadians from threats, potential violence, and intimidation, have been well-received by the Chinese community, but they also triggered the CCP to order its agents in Canada to “interfere and falsely malign Conservative candidates.”

Conservative candidate Kenny Chiu, who is seeking re-election in the B.C. riding of Steveston–Richmond East, has seen similar efforts to rob him of votes, in a series of smear campaigns against him over the years.

He told The Epoch Times in a previous interview that he has been a target of misinformation against him in other election campaigns, but this year “it has been exceptional.”

“It’s nothing compared to what I’ve seen—it’s multi-dimensional,” he said, referring to social media posts, radio commentaries, and online articles in pro-Beijing media that portray him negatively.

Chiu has taken a public stance against the CCP’s human rights violations and interference operations. In April, he introduced Bill 282, a private member’s bill that seeks to impel those who work on behalf of foreign entities to register as foreign agents in an effort to “counter foreign interference in Canada.

Genuis said the attempts by the CCP shows that the regime does not want a Conservative government that is ready to “stand up for what is right, stand up for justice, and combat foreign state-backed interference.”

“No country that is serious about its sovereignty can afford to allow the kind of interference we’ve seen come from other countries, especially from the government of China,” he said.

With reporting by Limin Zhou and Omid Ghoreishi