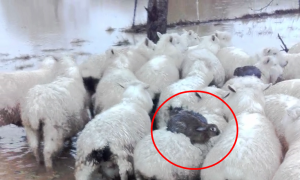 Since humans first domesticated sheep thousands of years ago, the relationship between the shepherd and his flock has been sacred. Shepherds are known for not getting much sleep, making sure none of their numbers go astray, and always keeping an eye out for predators. Sheepdogs, too, have for a long time helped.

So one day, a shepherd in Fordongianus, on the Italian island of Sardinia, went out to his flock to make sure all the sheep were healthy and grazing as normal.

At first glance, everything might have looked normal. The sheep were contentedly munching away at the green grass that was blowing in the wind. It was as peaceful a picture as he could imagine. But something was amiss, and so the shepherd began to record the scene.

In cultures around the world, sheepdogs are responsible for helping the shepherd keep wayward sheep from straying. They are often very attentive, as they have a job to do. But it soon came to the shepherd’s attention that the sheepdog wasn’t doing his job.

The video taken reveals that the sheepdog had abandoned his post and was lounging around taking a break! In fact, the dog wasn’t moving at all, or at least not under his own power.

From what the shepherd could see, his dog had just thrown in the towel and was taking a rest on the wooly, comfortable backs of one of the sheep. Though he barked at first, as if to show that he was still keeping on eye on things, he eventually settled down, back to being inactive.

After a couple of seconds, the dog even yawned as if to show how relaxed he was.

Rather than being embarrassed about getting caught resting on the job by his boss, the dog seemed to be pretty happy with himself as the shepherd took out his camera and captured the funny moment.

By all appearances, the sheep and sheepdog had gotten to know each other so well over the years that they became friends. It was as if the sheep had taken the dog in as a member of the family and let him ride around and take a break on their backs.

The dog looked over to the shepherd as if to say, “Well, that’s it for now. We’re off. See you later.”

Afterward, the video was posted on social media, and the bemused shepherd wrote a short caption for the sweet and hilarious video that summed it up well. “Today our sheep were accompanied by a new furry friend.”

But as it turns out, this cheeky little dog isn’t the first one that has had the bright idea of catching a ride on top of the comfy wool seat of a sheep’s back.

A video of a papillon dog, a kind of toy spaniel, on the back of sheep can be found on YouTube, as can another video of an Australian kelpie, a breed often used in livestock roundups, walking on the backs of its charges.

Perhaps it stands to reason that when animals spend enough time together, they, just like we humans, form bonds. And to be fair, it could always be argued that the dog has a much better vantage point from the top of the sheep! It’s a friendship that has its perks!