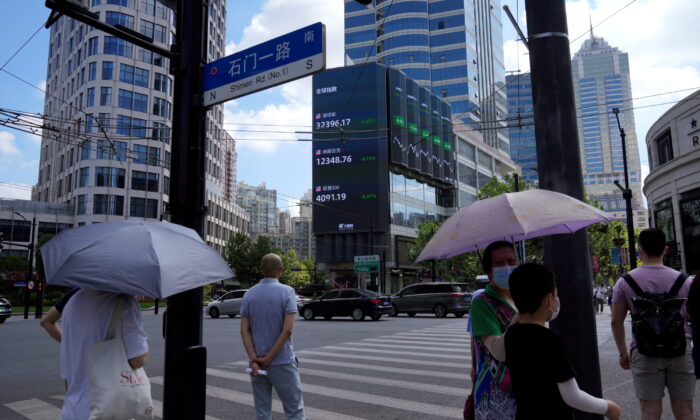 SYDNEY/LONDON—Shares slipped on Monday and the dollar extended its climb amid angst over global growth as most central banks keep raising rates, while a modest easing by China served only to highlight troubles in its property market.

U.S. Federal Reserve Chair Jerome Powell headlines a host of policy makers at Jackson Hole later in the week and the risks are that he will not meet investor hopes for a dovish pivot on policy.

“We expect a reminder that more tightening is needed and there is still a lot of progress to be done on inflation, but no explicit commitment to a specific rate hike action for September,” said Jan Nevruzi, an analyst at NatWest Markets.

“For markets, a bland delivery like that could be underwhelming.”

Futures are fully priced for another hike in September, with the only question being whether it will be 50 or 75 basis points. Rates are expected to reach 3.5 percent to 3.75 percent by year end.

A Reuters poll of economists forecast the Fed will raise rates by 50 basis points in September, with the risks skewed towards a higher peak.

The STOXX index of Europe’s 600 biggest stocks fell 0.97 percent on Monday with major regional markets in the red, as investors fretted about hawkish signals from European Central Bank policymakers.

The European Central Bank must keep raising rates even if a recession in Germany is increasingly likely, as inflation will stay uncomfortably high through 2023, Bundesbank President Joachim Nagel told a German newspaper.

One exception to the tightening trend is China, where the central bank trimmed some key lending rates by between 5 and 15 basis points on Monday in a bid to support a slowing economy and a stressed housing sector.

Unease over China’s economy tipped the yuan to a 23-month low, while pressuring stocks across the region.

South Korea’s KOSPI shed 1.2 percent while Japan’s Nikkei fell 0.5 percent, though it has drawn support from the recent sharp reversal in the yen.

BofA’s latest survey of investors found most were still bearish, though 88 percent did expect lower inflation over time, the highest proportion since the financial crisis.

“That helps explain this month’s rotation into equities, tech and discretionary, and out of defensives,” said BofA strategist Michael Hartnett. “Relative to history, investors are still long defensives and short cyclicals.”

He remained a cautious bear, given rising interest rates, and recommended fading further S&P rallies above 4,328.

Global bond yields spiked last week amid the relentless drumbeat of worrying inflation data, with British 10-year yields up by the most in five years and bund yields likewise soaring on reports showing sky-high prices.

The general air of global uncertainty has tended to boost the U.S. dollar as the most liquid of safe havens, leaving it up at 108.44 on a basket of currencies. Last week, it jumped 2.3 percent in its best performance since April 2020.

“The USD can track above 110.00 this week if the August flash PMIs for the major economies show a further slowing in economic growth or contraction in activity,” said Joseph Capurso, head of international economics at CBA, referring to surveys of manufacturing due on Tuesday.

“We also expect Powell to deliver a hawkish message about inflation, in line with recent comments from other Fed officials supporting the USD.”

Minutes of the European Central Bank’s last policy meeting are due this week and are likely to sound hawkish, since they decided to hike by 50 basis points.

The rise in the dollar has been a setback for gold, which was pinned at $1,737 an ounce.

Oil prices were also under pressure, amid worries about global demand and the high dollar, as well as consultations between the United States and the European Union on Iran’s response to the latest nuclear pact proposal.

By Wayne Cole and Lawrence White