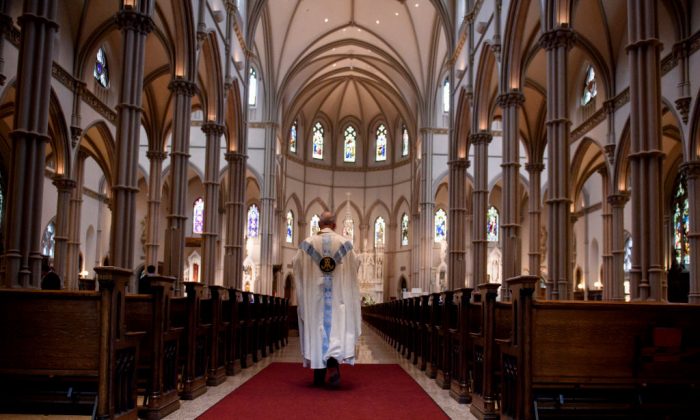 Father Kris Stubna walks to the sanctuary following a mass to celebrate the Assumption of the Blessed Virgin Mary at St Paul Cathedral, the mother church of the Pittsburgh Diocese in Pittsburgh, Pennsylvania, on Aug. 15, 2018. (Jeff Swensen/Getty Images)
Crime and Incidents

Allegations of sexual abuse have surfaced against Roman Catholic clergy in the Diocese of Lincoln in Nebraska, the latest in a series of scandals that have rocked the Catholic Church in the United States.

In the past few weeks, a number of accusers have come forward alleging sexual abuse and misconduct. According to the Associated Press, the conservative Nebraska diocese may be facing a criminal investigation.

Annual diocesan audits, meant to uncover sexual abuse, and conducted by the U.S. Conference of Catholic Bishops (USCCB) were refused by the Diocese of Lincoln between 2002 and 2015, as church leaders called them pointless. The Lincoln diocese was the only one in the United States that balked at the audits, which were a key reform enacted in the wake of the 2002 Boston clergy abuse scandal.

But one of the bishops during that period said he knew of at least two allegations against priests.

“I think the closed nature of the diocese made this worse,” Rachel Pokora, a member of the Catholic reformist group Call to Action, told AP. “Even if the audits never revealed anything—and I think they probably would have—it still shows an unwillingness to be open.”

In what appears to be a response attempting to show transparency and accountability, the diocese on Aug. 29 announced the addition of an anonymous hotline and website to assist persons in making reports of misconduct in Lincoln.

“This hotline is not a substitute or alternative to calling law enforcement; it is intended to offer the maximum alternatives to make sure any wrong in the Church is uncovered and reported,” Bishop James Conley said in the announcement.

Nebraska Attorney General Doug Peterson has called for more victims of sexual abuse by clergy or adults in positions of authority to come forward. In August on Twitter, he urged victims to “please report” any instances. The Nebraska attorney general’s office has spoken with at least two accusers.

Meanwhile, Lincoln police are investigating a now-retired priest who was accused of having an “emotionally inappropriate, non-sexual relationship” with a 19-year-old male altar server that involved alcohol in 2017, church officials said.

Nebraska’s attorney general’s office and the USCCB didn’t respond to a request for comment on the allegations by press time.

The allegations come after Pope Francis refused to comment about claims made by a former Vatican ambassador that he covered up sexual-abuse allegations against then-Cardinal Theodore McCarrick of the United States. In addition, a grand jury report from Pennsylvania found that more than 300 Catholic priests had abused more than 1,000 children since 1947 in six dioceses, including Pittsburgh.

The Lincoln diocese has refused to allow female altar servers, highlighting its reputation as one of the country’s most conservative districts, according to AP. Nearly all Catholic churches have removed their bans on female servers shortly after the Vatican lifted the restriction in 1994.