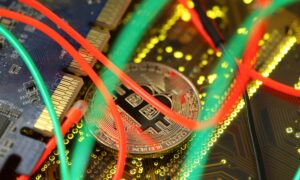 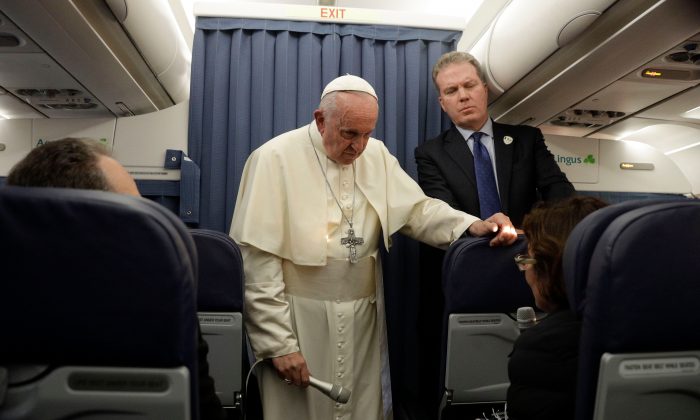 Pope Francis (C), flanked by Head of the Vatican press office, Greg Burke (R), addresses a reporter during a press conference in flight while returning from Ireland to The Vatican at the end of his two-day visit to Ireland on Aug. 26, 2018. (GREGORIO BORGIA/AFP/Getty Images)
International

Pope Francis on Aug. 26 said he “will not say a single word” about claims made by a former Vatican ambassador that he covered up sexual-abuse allegations against then-Cardinal Theodore McCarrick of the United States.

The claims, outlined in an 11-page letter by Carlo Maria Viganò, a former Vatican ambassador to the United States, describe how Viganò warned the pope in 2013 about the allegations and sanctions imposed on McCarrick by former Pope Benedict XVI.

Viganò, 77, wrote that Pope Francis didn’t respond to his exchange with him and, instead, allowed McCarrick to continue in his role as a prominent public figure in the Roman Catholic Church. Viganò also accused several other senior church officials of complicity, in regard to McCarrick.

Pope Francis, while on his plane flying back to Rome from Dublin after a two-day trip to Ireland, refused to comment on the Aug. 22 letter.

“I will not say a word about that. I think that the communique speaks for itself,” he said on Aug. 26.

Appearing to avoid the question further, the pope told journalists to “read the communique attentively and make your own judgment,” in reference to Viganò’s lengthy letter. “You have sufficient journalistic capacity to reach your own conclusions.”

The Vatican didn’t respond to an emailed request for comment before publication.

The pope met with victims of sexual abuse while in Ireland, although the trip was originally meant to celebrate Catholic families. Similar allegations of abuse by clergy in Ireland were brought to light again by the recent, high-profile U.S. incidents.

In July this year, Pope Francis accepted McCarrick’s resignation from the College of Cardinals, about five years after the original disclosure by Viganò. American Catholic Church officials said the allegations that McCarrick sexually abused a 16-year-old boy almost 50 years ago were credible and substantiated.

McCarrick, a former archbishop of Washington, has maintained his innocence.

Meanwhile, a church leader has vouched for the claims outlined in the letter.

Monsignor Jean-François Lantheaume, the former first counselor at the apostolic nunciature in Washington, told the Catholic News Agency (CNA) that Viganò was honest with his allegations.

“Viganò said the truth. That’s all,” he wrote to CNA, after refusing an interview with the outlet. Lantheaume said he doesn’t plan to comment any further on the subject.

According to Viganò’s letter, Lantheaume told him that in 2011, then-nuncio Pietro Sambi communicated with McCarrick in person about the allegations during a “stormy” exchange at a nunciature in Washington.

“Lantheaume, then first Counsellor of the Nunciature in Washington and Chargé d’Affaires a.i. after the unexpected death of Nuncio Sambi in Baltimore, told me when I arrived in Washington—and he is ready to testify to it—about a stormy conversation, lasting over an hour, that Nuncio Sambi had with Cardinal McCarrick whom he had summoned to the Nunciature,” Viganò wrote.

Monsignor Lantheaume told Viganò that “the Nuncio’s voice could be heard all the way out in the corridor.”

Three different Vatican Secretaries of State also were accused by Viganò of failing to act, even though they were told about McCarrick’s behavior; they were identified as Cardinals Angelo Sodano, Tarcissio Bertone, and Pietro Parolin. Some didn’t just fail to act, but attempted to cover-up the allegations as well, he said.

Viganò, in his letter, calls on Pope Francis to resign, as well as the other senior leaders involved.

“Pope Francis must be the first to set a good example for cardinals and bishops who covered up McCarrick’s abuses and resign along with all of them.”

The letter comes after a state grand jury report released publicly in August accused more than 300 “predator priests” across Pennsylvania of sexual abuse—and the Roman Catholic Church for a decades-long cover-up of it.