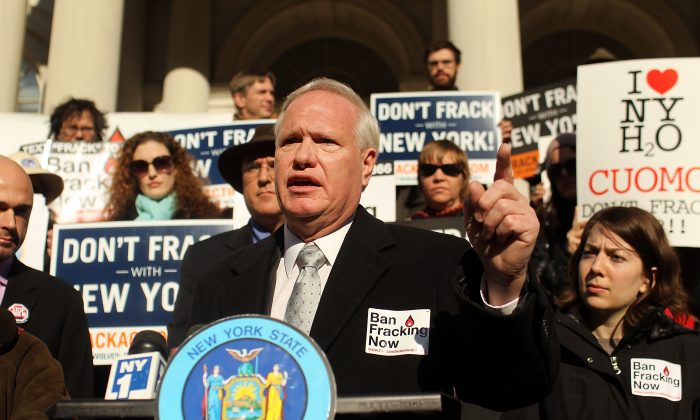 Democratic Sen. Tony Avella who is running for re-election in New York’s 11th district, recently received endorsements from a number of organizations.

The New York State AFL-CIO, Steamfitters Local 638, the Lieutenants Benevolent Association, and Voters for Animal Rights, have all endorsed Avella, according to a campaign announcement on Aug. 23.

The AFL-CIO is a federation of unions and represents 2.5 million members from 3,000 affiliated public, private, and building trade unions.

“I am honored to receive the endorsement[s]” said Avella in a statement. “Throughout my career, I have fought for the hardworking men and women in labor to strengthen collective bargaining rights, improve workplace safety, and raise wages.”

Running against Avella is John Liu, a former New York City comptroller who has an extensive history of flouting campaign finance laws. Liu is entering politics again after his 2013 mayoral bid fell apart—after two of his aides at the time were sent to prison for conducting an illegal straw donor scheme. Liu is also a Democrat.

“The senator has as much support as he had 4 years ago in the same race with John Liu,” Frediani said. “He is very proud of each one of them.”

The recent backings come after more than two dozen unions endorsed Avella.
“Senator Avella has worked to protect the health and safety of our men and women in law enforcement and he is the strong voice we need to send back to Albany to represent us and allow us to better protect all New Yorkers,” said Lou Turco, of the Lieutenants Benevolent Association.

Liu himself was fined $26,000 last year by the Board of Elections over the 2013 illegal straw donor scheme. He was also fined over $500,000 by the Environmental Control Board for poster violations—a fine that he still has not paid.

“Is he paying the fine? I mean he’s asking people to vote for him who pay their property taxes, who if they get a ticket—they pay the ticket. But meanwhile, he doesn’t want to do the same thing that the average voter does,” Avella told The Epoch Times in July. “I think it’s a disgrace.”

The senator recently posted a photo on Twitter showing promotions from Liu’s supporters done in sidewalk chalk, and describing what Avella claims is another Liu campaign violation. “While I love sidewalk chalk, clearly John Liu has not told his supporters that placing it on city sidewalks is against the law,” Avella wrote on Aug. 16. “He should let them know before they accumulate thousands of dollars of fines like John Liu’s previous campaigns.”

“Not a surprise though, as John Liu still hasn’t paid $500,000 in Sanitation violations since 2012,” Avella continued in a subsequent post.

Liu also has some questionable ties. In 2007, he personally met with leaders connected with the Chinese Communist Party (CCP). During the overseas trip, he met up with vice president of the Overseas Chinese Affairs Office, Xu Yousheng, who works with one of the regime’s primary foreign espionage offices that also helps monitor and harass overseas Chinese communities.

Liu’s aides were also found to have ties to organized crime and the communist regime. His fundraiser, Xing Wu “Oliver” Pan, was executive vice chairman of the Fukien American Association that organizes events for visiting officials of the Chinese Communist Party (CCP) in Chinatown. It is also associated with the Fuk Ching gang.

Liu himself was under federal investigation in 2013 but was not charged for fraud himself after the undercover operation was shut down prematurely after a New York Times article blew the lid on the FBI investigation.