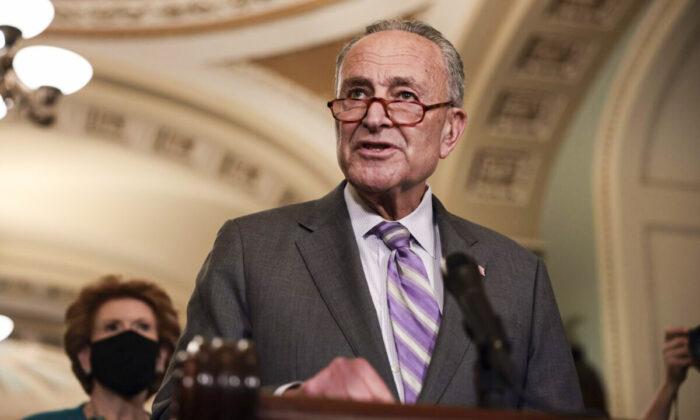 The Senate has approved a multibillion-dollar bill designed to support the U.S. high-tech industry, particularly the domestic semiconductor chip sector, in boosting U.S. competitiveness in face of threats posed by the Chinese regime.

In a 68 to 28 vote, the Senate passed the House’s Democrat-led America COMPETES Act, a controversial bill that was nominally designed to counter China’s influence but also provided funding for climate change projects and labor unions. The House legislation was approved in February by mostly a party-line vote, with Republicans saying that provisions in the bill weren’t tough enough on China.

On Monday, 27 of the 28 senators who voted against it were Republicans, while four other Republicans chose not to vote.

“This bill, for all its provisions, is really about two big things: creating more American jobs and lowering costs for American families,” Senate Majority Leader Chuck Schumer (D-N.Y.) said before the vote. “It will help lower costs by making it easier to produce critical technologies here at home, like semiconductors.”

“This legislation will fuel another generation of American innovation,” he added. “America cannot afford to come in second place when it comes to technologies like 5G, AI [artifical intelligence], quantum computing, semiconductors, bio-engineering, and so much more.”

Schumer and Sen. Todd Young (R-Ind.) introduced a Senate version of the bill, the U.S. Innovation and Competition Act (USICA), which was passed in June last year.

Now, the two chambers of Congress will convene in a conference committee to reconcile differences between the bills before a final version can be sent to the president’s desk.

Sen. Jeanne Shaheen (D-N.H.), who voted in favor of the House’s bill, said the legislation sent “an unmistakable message to authoritarian regimes around the world,” according to a press release from her office.

Heritage Action, a grassroots conservative advocacy group and sister organization of the Washington-based think tank The Heritage Foundation, took to Twitter to express its concerns about what the final bill that could cost over $300 billion might look like.

“The House conferees will try to add provisions from their bill back into the final deal. Those House provisions will make a bad bill worse,” the group wrote of the bill it said does little to meaningfully counter the CCP.

It added, “Senators must draw a red line and refuse to add the harmful Left-wing provisions of the COMPETES Act.”