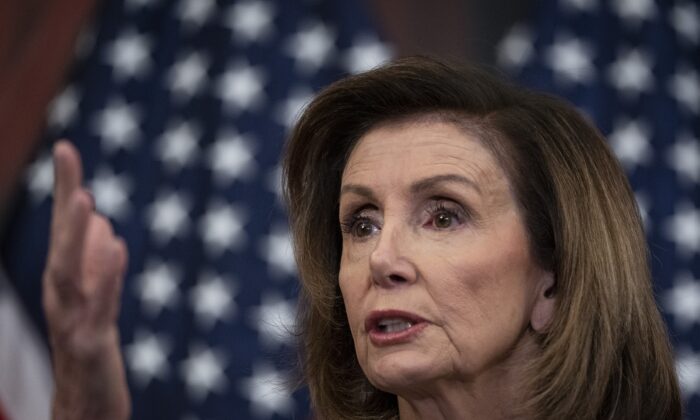 Speaker of the House Nancy Pelosi (D-Calif.) speaks about the COMPETES Act at the U.S. Capitol on Feb. 4, 2022. (Drew Angerer/Getty Images)
Congress

The House approved the controversial COMPETES Act in a mostly party-line 222–210 vote on Feb 4.

The measure, nominally intended to increase U.S. competitiveness with China but loaded with other, less relevant, provisions, was unanimously opposed by all Republicans, with the support of Rep. Stephanie Murphy (D-Fla.), a House moderate who has often taken a position against her party.

Only Rep. Adam Kinzinger (R-Ill.), who was officially censured by the Republican National Committee on Feb. 3 for his role on the Jan. 6 Committee, voted with Democrats to pass the legislation.

In a 20-page summary of the measure that was released on House Speaker Nancy Pelosi’s (D-Calif.) website, Democrats stated that the legislation is “a bold legislative package that makes transformational new investments in research, innovation and American manufacturing that will ensure that America can outcompete any nation in the world, now and for decades to come.”

“The package will accelerate U.S. production of critical semiconductor chips, strengthen the supply chain to make more goods in America, turbocharge our research capacity to lead the technologies of the future, and advance our global competitiveness, while supporting strong labor standards and human rights, among other key provisions,” the summary reads.

The summary notes that the measure is one that’s acceptable to both sides of the aisle.

“Its major components include many bills that have already passed the House by strong bipartisan votes or have bipartisan cosponsors,” it reads.

The legislation indeed has several provisions that Republicans and Democrats both agree are necessary. For instance, one section of the measure is designed to increase U.S. extraction of semiconductor metals and the country’s manufacturing of microchips.

This is a sector that the United States has allowed east Asia to dominate over the past several decades. In 1990, the United States produced about a third of the world’s microchips; by 2021, that number had careened to only 12 percent, according to the Semiconductor Industry Association (pdf).

However, other sections of the legislation are far less agreed upon.

For one, the COMPETES Act would “[invest] in the fight against climate change” by “supporting research to advance the next generation of energy storage, solar, hydrogen, critical materials, fusion energy, manufacturing, carbon removal, and bioenergy technologies, among many other areas.”

Democrats are also anxious that the measure’s funding emphasizes “diversity.”

Historically, research and tech funding in the United States has been targeted to specific sectors or projects. Generally, these are carried out by already-existing agencies, such as NASA or the Centers for Disease Control and Prevention, or through government-contracted third parties.

Democrats’ proposed legislation would instead “strengthen and expand our nation’s STEM workforce to better represent the diversity of our nation.”

To meet the goal of “investing in the fight against climate change,” the legislation would “[prepare] the next generation of diverse clean energy researchers, scientists, and professionals.”

The COMPETES Act would also push to increase “diversity” among STEM teachers.

The summary states how the measure would go about meeting these “diversity” goals. It would “[empower] Federal agencies and universities to identify and lower barriers to the recruitment, retention, and advancement of women, minorities and other groups underrepresented in STEM studies and careers.”

In addition, it states that agencies would be required “to collect comprehensive demographic data on the grant review process and STEM faculty at U.S. universities.” It also “provides supports for grant recipients who also have caregiving responsibilities.”

Moreover, the COMPETES Act would allow for the importation of thousands of new refugees, even as the United States faces an unprecedented level of illegal immigration at its southern border. Even more controversially, the legislation would allow for a new class of “investor visa,” in short allowing the wealthiest citizens from other countries to enter the United States for no reason other than their wealth.

In the Senate, where all legislation must achieve a 60-vote threshold to end debate and go to a simple majority floor vote, Republicans could do far more to stop the measure. As long as 41 of the chamber’s 50 Republican senators oppose the legislation, they would be able to deny Democrats the 60-vote threshold and force them back to the negotiating table.