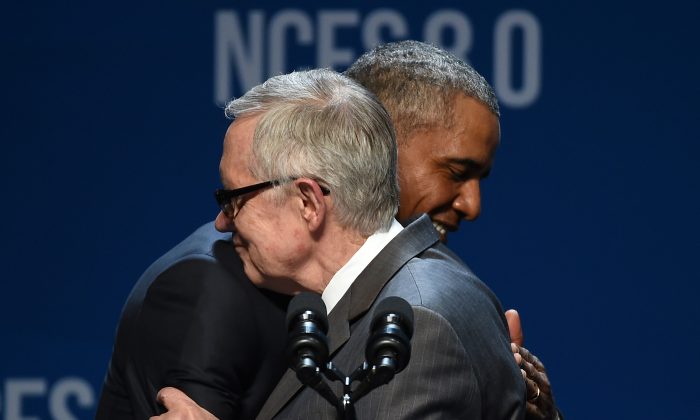 Senate Democrats on Thursday blocked consideration of a Republican resolution to reject the Iran nuclear deal, effectively allowing the agreement to take effect without President Obama having to issue a veto.

A procedural vote on what’s known as a resolution of disapproval failed 58-42. Such a vote requires 60 votes to advance.

The only Democratic defectors on the vote were the same four who already had announced their opposition: Sens. Bob Menendez of New Jersey, Ben Cardin of Maryland, Chuck Schumer of New York, and Joe Manchin of West Virginia.

“I think that an agreement this important deserves a final [up-or-down] vote,” Sen. Jeff Flake (R-Ariz.) told The Daily Signal after the procedural measure failed.

And the House has yet to finish its own series of votes on the nuclear deal.

Those votes are aimed at drawing attention to side deals involving international nuclear inspectors.

But the efforts won’t have practical impact on stopping the deal’s implementation, with the filibuster by Democratic senators making the ongoing debate moot.

“The Senate has spoken with a clarion voice and declared the historic agreement to prevent Iran from obtaining a nuclear weapon will stand,” said Senate Democratic leader Harry Reid in a statement.

“Any future attempts to re-litigate this issue in the Senate will meet the same outcome and will be nothing more than wasted time.”

The Iran nuclear deal, negotiated by the United States and five other world powers and announced July 14 in Vienna, imposes constraints on Iran’s nuclear program.

The curbs to the nuclear program begin to be eased after 10 years.

Meanwhile, the U.S., the European Union, and the United Nations will lift international sanctions on Tehran as Iran complies with the deal.

The agreement will be formally adopted on Oct. 19—90 days after it was endorsed by the United Nations Security Council.