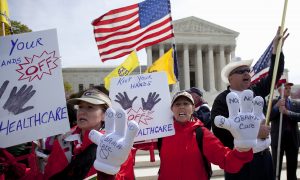 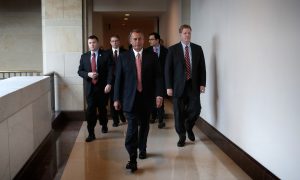 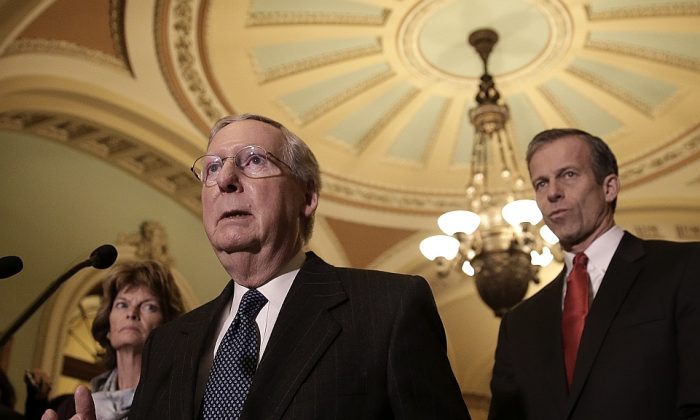 Senate Majority Leader Mitch McConnell (R-Ky.) (L) with Senate Republicans at the Capitol in Washington, D.C. on Jan. 13. McConnell wants to adjust the definition of a workweek under the ACA from 30 to 40 hours. (Win McNamee/Getty Images)
US

Last week, the House passed legislation to change the employer mandate of the Affordable Care Act (ACA). The goal was to reduce the number of small businesses that would be financially burdened by having to provide health insurance to workers.

The president has said he would veto the bill if it reached his desk, and it’s still uncertain whether the bill’s proponents can find 60 votes in the Senate to override a filibuster from Democrats. The bill would need the votes of six Democrats, assuming every Republican voted for it, but thus far only two, Sen. Joe Donnelly (D–Ind.) and Joe Manchin (D-W.Va.) have signaled support for overturning the 30-hour definition.

“Opponents of the Affordable Care Act want to try and undermine the ACA in whole in in many parts as possible, they want to keep on offering serial attacks on the ACA,” said Ron Pollack, executive director of Families USA.

According to the Congressional Budget Office, the bill would cost around 1 million people their employer coverage, and cost the government $46 billion by 2025, as more people seek Medicaid.

Moreover, a 40-hour workweek would likely incentivize employers to shift or reduce work hours around so that their workers fall under the threshold. More people would be affected than with a 30-hour workweek threshold, because more people work 40-hour weeks. Almost 29 million employees of large firms work 40 to 44 hours per week, while just 3 million work 30 to 34 hours per week, according to a study by the Commonwealth Fund.

The employer mandate for firms with 50 to 99 workers was originally scheduled to go into effect in 2014, but has been repeatedly delayed.

“It’s alleged that the 30-hour workweek has a deleterious impact on employment, but the problem is, the proposal being offered to change the statute has a far greater potential to harm work hours,” Pollack said.

It’s unlikely the Republicans would use the “nuclear option” and change Senate rules to bypass a Democrat filibuster of legislation amending the ACA. Sen. Ted Cruz (R-Texas), one of the more hawkish opponents of the law, said Republicans shouldn’t use the nuclear option, even to repeal “Obamacare.”

“We should preserve the procedural protections in the Senate for the rights of the minority,” Cruz told Roll Call on Monday. The 60-vote rule to bypass a filibuster is “like the saucer under the tea cup to cool deliberations, and I think those checks and balances were inspired.”

Some critics of the ACA have called for a repeal of the employer mandate altogether, which they said would eliminate work-hour distortions that result from the law. A study by the Urban Institute argues that a repeal would cost much less over the next decade than the $130 billion projected by the Congressional Budget Office.

“Eliminating the employer mandate would eliminate labor market distortions in the law, lessen opposition to the law from employers, and have little effect on coverage,” the study concluded. “Alternative sources of revenue would have to be found to compensate for the federal loss of penalties.”

Other studies have estimated the costs of the mandate as far higher. A paper by the information group S&P Capital IQ found that S&P 500 companies could save $700 billion in the next decade if they rescind coverage for their employees. That may be, but many workers, especially professionals, expect employer coverage as a perk.