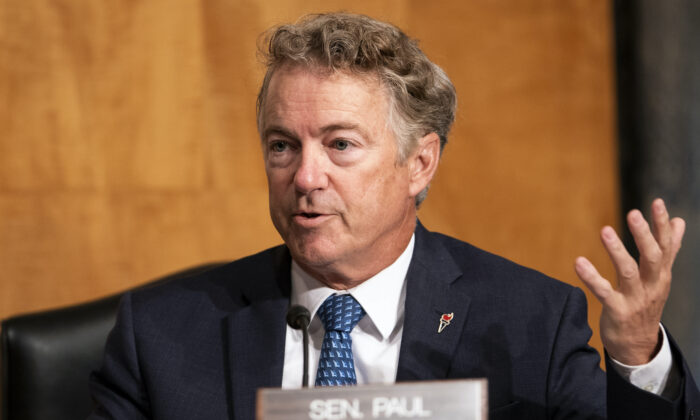 Sen. Rand Paul (R-Ky.) said Thursday that he will block the quick passage of a symbolic resolution that is intended to warn Russia unless the legislation incorporates his changes.

Some of the amendments he wants were proposed to sponsors of the resolution on Wednesday, but they were rejected, the Kentucky Republican said. As a result, Paul said he would object to quickly passing the measure unless some of his amendments are added.

Sen. Rob Portman (R-Ohio), one of the bill’s co-sponsors, told The Hill he is “working through it” and is in talks with Paul. Other than Portman, Sens. (D-N.H.), Dick Durbin (D-Ill.), John Cornyn (R-Texas), James Risch (R-Idaho), and Bob Menendez (D-N.J.) are sponsoring the measure.

Text of the resolution (pdf) “denounces the Russian military buildup of over 150,000 troops on Ukraine’s border” amid heightened tensions over whether Moscow will invade its neighbor. Top White House officials, including President Joe Biden and Secretary of State Antony Blinken, said Thursday that they again believe Russia is about to invade Ukraine.

The measure also asserts that Russia is “threatening the security of bordering NATO allies … contrary to established international norms.”

“It’s important that Congress speaks with one voice,” Portman told Politico on Wednesday. “I would hope every member would allow us to have a voice vote on it and get this done.”

Senate rules require all 100 members to consent to the quick passage of a bill or resolution before they leave town for a recess.

“The stakes go far beyond Ukraine,” he said. “This is a moment of peril for the lives and safety of millions of people as well as for the foundation of the United Nations charter and the rules-based international order that preserves stability worldwide.”

“In fact, it’s unfolding right now, today, as Russia takes steps down the path to war and reissued the threat of military action,” Blinken added.

Russia has repeatedly denounced the Biden administration’s and NATO’s claims as false or overblown.

Russian Deputy Foreign Minister told Russian media Thursday that military exercises with Belarus “are over; you can calm down. The units are returning to their places of permanent deployment, as planned.”

It comes as Russian officials expelled on Thursday the second-in-command at the U.S. Embassy in Moscow, Bart Gorman, according to a Department of State spokesperson.

“We call on Russia to end its baseless expulsions of U.S. diplomats and staff and to work productively to rebuild our missions,” the spokesperson told outlets. “Now more than ever, it is critical that our countries have the necessary diplomatic personnel in place to facilitate communication between our governments. ”