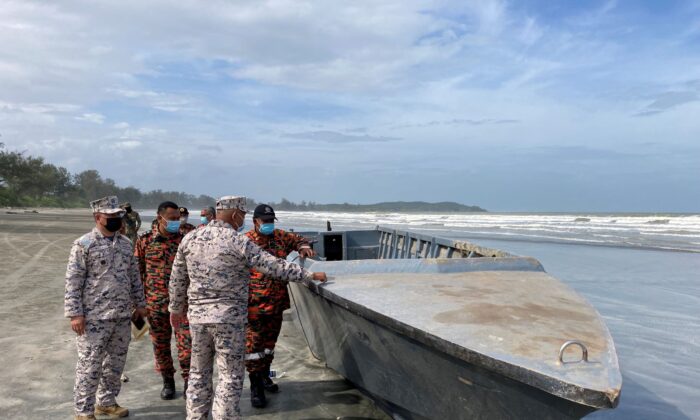 Officials inspect a boat that capsized and killed some of the people onboard, while other migrants remain missing in Kota Tinggi, Johor state, Malaysia, on Dec. 15, 2021. (Malaysia Maritime Enforcement Agency (MMEA)/Handout via Reuters)
Asia & Pacific

KUALA LUMPUR—A search and rescue mission was underway for 25 Indonesians missing after a boat capsized off Malaysia on Wednesday killing 11 people, among them suspected undocumented migrants, maritime authorities said.

There were 14 people reported safe among the estimated 50 aboard the boat, which turned over in adverse weather off southern Johor state around 4:30 a.m. (2030 GMT).

Survivors and the boat were found on a beach in Tanjung Balau, according to the Malaysian Maritime Enforcement Agency (MMEA).

“The boat was believed to have traveled from Indonesia and capsized after being hit by strong waves,” Johor maritime operations deputy director, Captain Simon Templer Lo Ak Tusa told reporters.

All migrants involved were Indonesian, the MMEA said.

The Indonesian consulate in Johor in a statement said its representatives were on location to help identify and manage the remains of the victims.

The accident is the latest in a string of disasters recorded in the waterways between Indonesia and Malaysia in recent years, often involving overloaded boats ferrying laborers seeking work in Malaysian factories and plantations.

According to Anis Hidayah of Migrant CARE, a Jakarta-based non-government organization, between 100,000 and 200,000 Indonesians travel illegally to Malaysia each year for work, many of them recruited by trafficking gangs and subjected to exploitation when they arrive.

“They travel to Malaysia by boat and there are so many accidents because they depart at night and arrive early in the morning,” she told Reuters, adding boats often stop before reaching land to avoid detection and require those aboard to swim ashore.

Simon, of the Malaysian maritime agency, urged migrants not to embark on such risky journeys.

“We would like to advise people, especially the undocumented migrants, … to use valid routes to prevent such incidents from recurring,” he said.