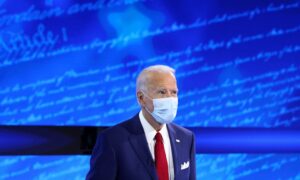 Among the swirl of information being released on Hunter Biden, son of Democratic presidential nominee Joe Biden, has been direct emails provided by a former business partner of Hunter, which point to various pay-to-play deals, among other issues. Those emails, and additional information, were provided to Seamus Bruner, author of “Compromised: How Money & Politics Drive FBI Corruption,” and of the new book, “Fallout: Nuclear Bribes, Russian Spies, & D.C. Lies.” To learn more about this we’ve invited Seamus Bruner to speak with us.

Meanwhile, the Chinese government had agents who were sent to capture Chinese targets on U.S. soil. The program, called Operation Fox Hunt, included coercing targets to return to China, threatening their families, and pressuring them to commit suicide. And on October 28, the U.S. Department of Justice announced it charged eight people in the plot, and made five arrests.

And, Newsweek had an exclusive story that identified 600 U.S. groups linked to the Chinese government, which are working to push the regime’s political and economic interests. These include businesses, universities, think tanks, social and cultural groups, Chinese organizations, Chinese language media and chat groups, and others. It notes that the identified groups are “all in regular touch with and guided by” China’s leadership.