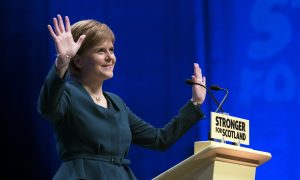 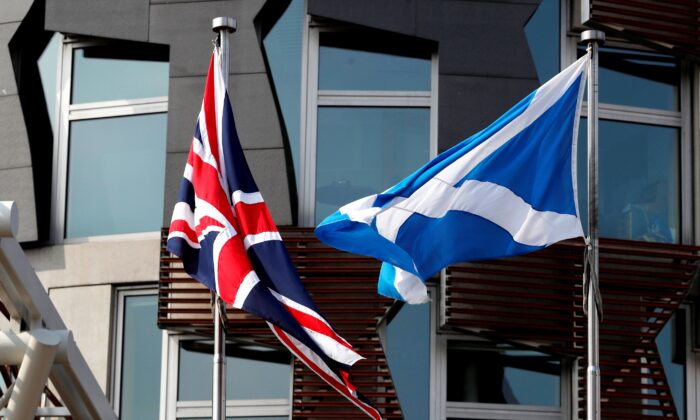 A Scottish flag flies next to British Union Jack flag outside the Scottish Parliament in Edinburgh, Scotland, Britain, on April 24, 2019. (Russell Cheyne/Reuters)
UK

LONDON—The Scottish National Party (SNP) published a “Roadmap to Referendum” on Saturday, laying out plans for another vote on Scottish independence just as the United Kingdom grapples with COVID-19 and the impact of Brexit.

British Prime Minister Boris Johnson, who would have to agree to a new referendum, argues there is no need for a new vote after independence was rejected by Scottish voters in 2014.

But the SNP has said that if it wins a parliamentary majority at elections scheduled for May 6, it will pass its own bill so that a referendum can take place once the pandemic is over.

It says that the UK government will either have to agree to it or take legal action to dispute the legal basis of the referendum.

“Such a legal challenge would be vigorously opposed by an SNP Scottish government,” said the document, dated Jan. 24.

Polls show that Scottish nationalists are on course to win a record majority in elections for Scotland’s devolved parliament.

Scots voted 55-45 percent against independence in a referendum in 2014, but Brexit and the British government’s handling of the COVID-19 crisis have bolstered support for the SNP, with most polls showing a majority now favour breaking away.

A poll published on The Times website on Saturday showed another potential threat to the future of the UK, with 51 percent of Northern Irish voters saying they favoured a referendum about their future within the next five years, compared to 44 percent who oppose it.

Support for a United Ireland stands at 42 percent according to the polls, versus 47 percent who object to Northern Ireland leaving the UK.