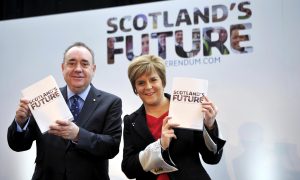 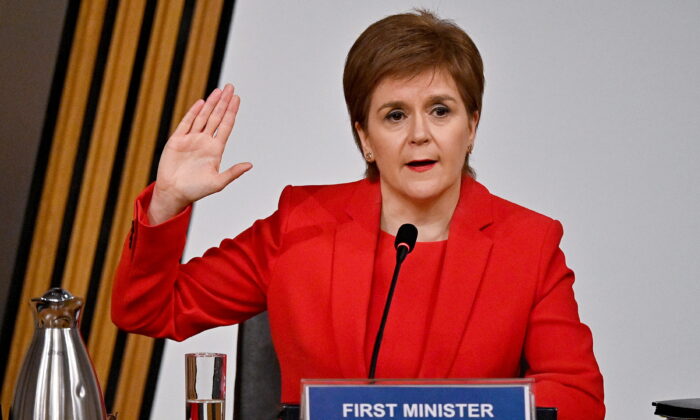 LONDON—Scottish leader Nicola Sturgeon on Wednesday defended her handling of sexual harassment complaints against her predecessor Alex Salmond in high-stakes testimony on an issue that threatens to scupper her dream of leading Scotland to independence.

Describing the feud with Salmond as “one of the most invidious political and personal situations” she had ever faced, Sturgeon denied Salmond’s accusations that she had plotted against him and misled the Scottish parliament.

The feud between the pair, once close friends and powerful allies in the cause of Scottish independence, has reached fever pitch in recent weeks, threatening the electoral prospects of the Scottish National Party (SNP) at a crucial time.

With Scottish elections coming up in May, Sturgeon believes a strong showing for her party would give her a mandate to demand a second referendum on independence, after one in 2014 in which Scots voted by 55 percent to 45 percent to stay in the United Kingdom.

With Britain’s exit from the European Union boosting pro-independence sentiment in Scotland, where a majority voted against Brexit, a series of opinion polls have suggested the SNP could well win a second independence referendum.

But a relentless torrent of negative and sometimes lurid headlines about the Sturgeon-Salmond row could deprive her of the emphatic win she needs to overcome resistance by British Prime Minister Boris Johnson, who opposes a referendum.

In highly anticipated testimony to an inquiry into how she and her government handled the sexual harassment claims against Salmond, which he denies, Sturgeon denied any improper behaviour, saying she had “searched her soul” many times.

“In one of the most invidious political and personal situations I have ever faced, I believe I acted properly and appropriately, and overall, I made the best judgments I could,” she told lawmakers.

“For anyone, at least anyone willing to listen with an open mind, that is what I will seek to demonstrate today,” she said, before beginning a detailed defence of her individual decisions, expected to last most of the day.

In his own explosive testimony on Friday, Salmond accused Sturgeon in taking part in a malicious plot to drive him out of public life, and of breaking the ministerial code, a set of rules on how ministers should behave, in the process.

Scottish Conservative leader Douglas Ross has also accused Sturgeon of lying and has called for a vote of no confidence against her.

Denying that she had broken the code, a transgression that would normally lead to a resignation, Sturgeon hit back hard, rejecting Salmond’s talk of a plot as absurd and linking the saga to the broader context of the “me too” movement.

“As first minister, I refused to follow the age-old pattern of allowing a powerful man to use his status and connections to get what he wants,” she said, accusing Salmond of having asked her to intervene in his favour after women complained about him.

She said he had failed to recognise how difficult the situation was “first and foremost for women who believed his behaviour towards them was inappropriate, but also for those of us who have campaigned with him, worked with him, cared for him, and considered him a friend, and who now stand unfairly accused of plotting against him”.

Salmond stood trial on charges of sexual assault and was acquitted last year.

By Elizabeth Piper and Estelle Shirbon