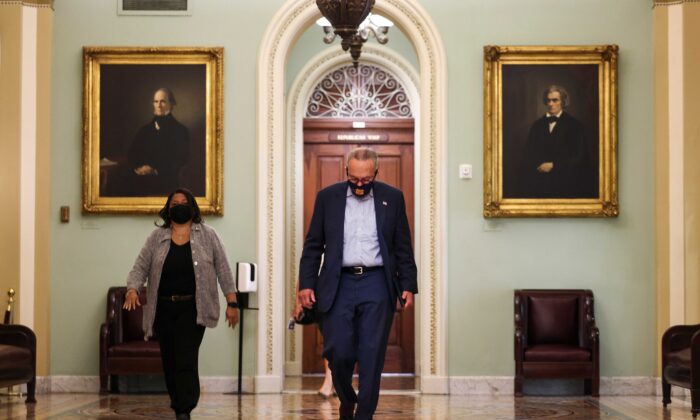 On the Senate floor Wednesday morning, Majority Leader Chuck Schumer (D-N.Y.) announced that Democrats are crafting a stopgap bill to fund the government through December to avert a shutdown on Friday.

Schumer said that the bill will extend government funding to Dec. 3, and will provide “long-sought” emergency relief to areas affected by Hurricane Ida as well as emergency funding for the ongoing Afghan special immigrant crisis. On Monday, Senate Republicans successfully filibustered a bill with the same measures by blocking debate on the continuing resolution.

With these ongoing crises, Schumer said: “the last thing the American people need is a government shutdown. This proposal will prevent one from happening.”

Democrats have also emphasized that the nation’s first ever default could arise from a failure to raise the debt ceiling. Treasury Secretary Janet Yellen has warned that the results of such a default would be “catastrophic.” House Speaker Nancy Pelosi (D-Calif.) warned Tuesday that this default could destroy the value of the dollar and wipe out “trillions in family wealth” for middle Americans.

Schumer claimed that the crisis was caused by “Republican stupidity.” Democrats “are working to prevent such an outcome,” Schumer said.

Republicans have argued that the crisis is of Democrats’ own making. In a petition drafted by Sen. Ron Johnson (R-Wis.) in early August, 46 Republican senators refused to approve a debt limit increase. They explained that Democrats were on an “unprecedented deficit spending spree,” and argued that approving a debt limit increase would enable future Democratic spending.

Still, many Democratic leaders, including Schumer and President Joe Biden, assumed that these Republicans were bluffing. Monday’s vote demonstrated that practically every Republican, even those who did not sign the petition, opposed a debt limit increase.

At a Tuesday press conference, Pelosi also argued that the broad majority of spending came from debts incurred under President Donald Trump. “This is not about future spending, this is to pay the bills that were incurred,” she said, adding, “Only 3 percent of this is about Joe Biden’s presidency.”

Schumer said of the vote, “Republicans unanimously voted in favor of default.”

In the petition, Republicans warned that the United States should not be allowed to default, but demanded that Democrats raise the debt ceiling on their own through reconciliation, the process being used to pass Democrats’ $3.5 trillion budget. In early September, Pelosi rejected the move; Tuesday, Schumer restated that opposition.

“Going through reconciliation is risky to the country and is a non-starter,” the senator said, adding that using reconciliation to raise the debt limit is “very, very risky,” and said, “We’re not pursuing that.”

Speaking to reporters Tuesday, Cruz predicted that such a stopgap bill would be proposed and would fail.

He accused Schumer of “trying to hide from responsibility for the trillions in debt that Democrats are irresponsibly trying to load onto the backs of our children and grandchildren.” The majority leader, he said, was “trying to find an outcome where 10 Republicans vote with him so he can blame those Republicans for Democrats’ irresponsible debt. It’s a game. It won’t work. Schumer knows it won’t work.”

While McConnell suggested that Republicans may be open to such a resolution on Monday, Cruz said that this new move will fail as well.

“When this fails, I fully expect Schumer is gonna surrender,” Cruz commented, “and he’s gonna do what he could have done weeks or months ago, which is [to raise] the debt ceiling using Democratic votes.” He added, “Accordingly, Democrats will bear responsibility for the trillions in debt that they’re saddling on the country.”

“The Democrats can deal with us all by themselves, because they have the House, the White House, and the Senate. So this is their responsibility,” said Sen. Rick Scott (R-Fla.) earlier in the month.

McConnell criticized Democrats’ “reckless” legislation, which he said was crafted “on a partisan basis” and insisted that Republicans would not vote to raise the debt ceiling.

For Democrats’ stopgap measure to pass, at least 10 Republicans will need to join with the majority party. But so far, none have announced a plan to do so. The broad majority of Republicans continue to insist that Democrats raise the debt limit alone through reconciliation, even as the party remains hesitant to do so.