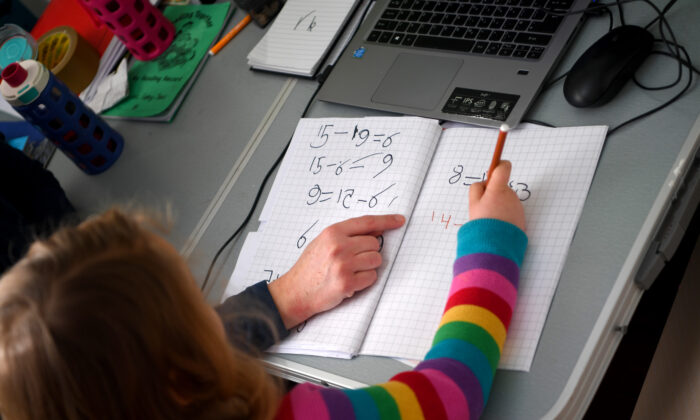 A file photo of a girl doing her Math studies in her bedroom on Jan. 25, 2021. (Gareth Copley/Getty Images)
Education & Family

School Enrollment Across US Dropped by Almost 3 Million From 2019 to 2020: Report

School enrollment across the United States dropped by 2.9 million from 2019 to 2020 amid the coronavirus pandemic, according to new data released on Tuesday by the U.S. Census Bureau.

This marks the lowest level—52.4 percent of the learning-aged population—of school enrollment for those under 35 years of age in over 20 years, as per the bureau’s data.

College enrollment also fell to its lowest level since 2007, with the majority of the decline occurring in colleges with two-year courses, which had their lowest enrollment levels in 20 years.

While the reasons for the declining figures are unclear, multiple factors such as pandemic-related lockdowns, school closures, and a focus on remote learning will undoubtedly have played a part.

Child care issues also appear to be a factor in the declining numbers. Enrollment of children between 3 and 4 years of age who have a working mother also fell by 35 percent from 2019 to 2020, compared to a 10 percent decrease of other 3- and 4-year-olds enrolled.

The Current Population Survey, sponsored jointly by the Census Bureau and U.S. Bureau of Labor Statistics, is the primary source of labor force statistics for the U.S. population.

However, the Census Bureau notes there were some data collection challenges during the COVID-19 pandemic, which may have affected some of the results it reported. It noted that the overall response rate to its Current Population Survey (CPS) was lower in 2020 than 2019 by 3 percent.

“During the pandemic, students may have continued their enrollment (i.e., to study) but in less traditional ways such as remote learning or by completing virtual or paper assignments. The various learning options increased the potential for misclassification of enrollment status, potentially artificially decreasing some enrollment estimates,” the bureau said.

The COVID-19 pandemic has also exacerbated teacher shortages in public schools across the United States, forcing some students to return to remote learning, according to data released earlier this year.

The teacher shortage comes amid a spike in retirements and resignations of teachers prompted by the stress of the COVID-19 pandemic.

Teacher shortages and difficulties filling job openings have been reported in Tennessee, New Jersey, and South Dakota, which saw one school district begin the year with 120 teacher vacancies.

In Texas, Houston, Waco, and a number of other districts saw hundreds of teaching vacancies unfilled at the start of the year.

In one California school district, staff have reportedly been sending flyers home with students to let parents know the district is “now hiring.”

According to a June poll that surveyed 2,690 members of the National Education Association between May 19 and May 26, one-third of members reported plans to leave education sooner than they had initially planned as a result of the pandemic, which could further exacerbate the existing teacher shortage.