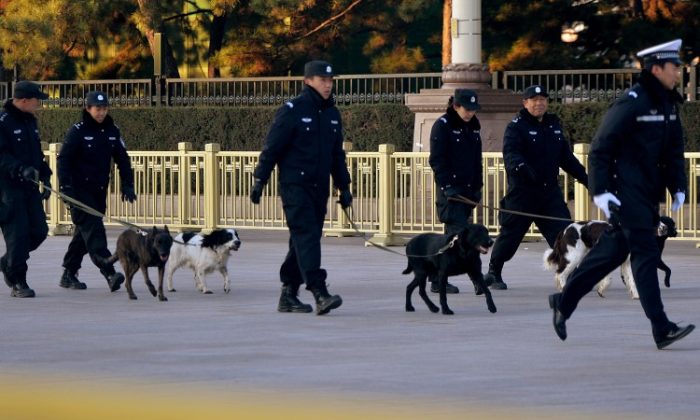 A police squad with dogs enforces security during the closing of the recently-concluded 18th Party Congress. Liberals scholars in China have called for the abolishment of the Communist Party committee that oversees the police and all law enforcement in China. (Mark Ralston/AFP/Getty Images)
China

The top committee that controls all law enforcement operations in China itself mostly operates outside any written law. That results in enormous abuses of power that some reformers in China are trying to address—at a current critical juncture in Chinese politics after a new leadership has been sworn in.

Mao Zedong’s former secretary, Li Rui, called for the Political and Legislative Affairs Committee (PLAC) to be abolished at a Peking University seminar which convened to discuss political reform, two days after the closing of the 18th People’s Congress.

Li Rui, 95-year-old former executive vice minister of the Central Organization Department, spoke at the forum, emphasizing that it is not enough to remove the PLAC from the Politburo Standing Committee, and that it should be abolished completely.

He referred to the Bo Xilai case, where Bo’s abuse of power was a result of his position as protégé to former regime leader Jiang Zemin, and heir apparent to Zhou Yongkang, the former secretary of the PLAC. Rui also proposed nationalization of the military, which is under the command of the Chinese Communist Party’s Central Military Commission.

“In the past, when the PLAC’s Party Secretary Zhou Yongkang was part of the Politburo Standing Committee, he turned the PLAC into an independent kingdom. He could order the provincial PLACs offices to arrest and suppress people under the name of ensuring stability,”
Ruan Ming said.

At the 18th Party Congress the PLAC was removed from the Politburo Standing Committee, and nine committee positions became seven.

Ruan Ming also said that though the PLAC is no longer part of the Standing Committee, it can continue to commit “evil deeds” as long it still exists. Thus, it is necessary to abolish it completely, he says.

The position held by Zhou Yongkang reflected former leader Jiang Zemin’s sustained control over key parts of the CCP even after leaving office.

Shi Zangshan, a Washington-based analyst of Chinese politics, says that the worst crimes of Jiang’s faction, such as the persecution of Falun Gong practitioners, were carried out by the PLAC.

Jiang Ping, former president of China University of Political Science and Law pointed out at the conference that China’s judicial system had deteriorated since the 17th Party Congress, as the judicial system, under the PLAC, is not independent and the authority of the PLAC has increased.

Chen Guangzhong, another former president of that university, believes that China must maintain the independence of its judicial system, as the PLAC often “misjudged a case and shirked responsibility later.”

While the PLAC misjudged a large numbers of cases, or even manufactured cases, the Propaganda Department powered the state media to spread propaganda and rumors. An example, in the persecution of Falun Gong, was a self-immolation case in 2001, where PLAC secretary Luo Gan worked with Jiang Zemin to frame Falun Gong.

Shi Zangshan says that even after Jiang stepped out of office the authority of the PLAC continued to increase, and the agency demanded a budget higher than the military’s in order to “maintain stability.”

In recent years, the PLAC has extended its persecution to other groups, such as minorities, Christian house churches, petitioners, political dissenters, and human rights activists and lawyers, confiscating their assets, and subjecting them to arbitrary arrest, surveillance, and illegal raids on their homes.

The Chinese government restricted many liberal scholars from speaking publicly until after the end of the Congress. Some were even surprised that the forum was allowed to be held at all, given the intense political scrutiny given to such discussions in China. Attendee Hu Xingdou, professor of economics at the Beijing Institute of Technology, when asked his thoughts on that question by a Hong Kong newspaper, said simply: “I don’t know either.”