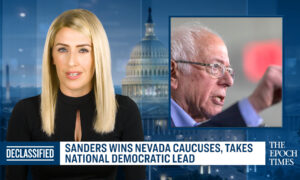 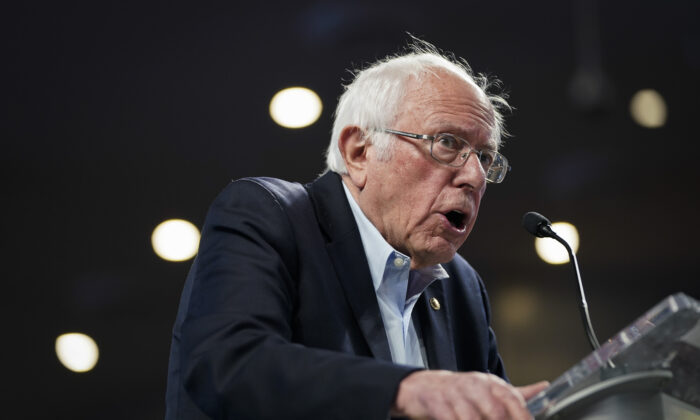 Sen. Bernie Sanders (I-Vt.) released a fact sheet on Feb. 24 detailing how he would pay for his proposals, moments after announcing he would do so during a CNN town hall in South Carolina.

The presidential candidate said he would be publishing the plans detailing how he will pay for ambitious proposals like Medicare for All, the Green New Deal, and canceling student debt, by way of distinguishing himself from Trump’s campaign.

As for his Green New Deal, Sanders said he plans to raise $16.3 trillion to transform the energy system away from fossil fuels and toward energy efficiency and renewable energy. The plan would also create 20 million well-paying union jobs in the process, he added.

This would be funded by “making the fossil fuel industry pay for their pollution through litigation, fees, and taxes, and eliminating federal fossil fuel subsidies,” generating revenue from the wholesale of energy, decreasing defense spending by $1.215 trillion, collecting $2.3 trillion in new income tax revenue, saving $1.31 trillion by reducing the need for federal and state safety net spending, and raising $2 trillion in revenue by enforcing higher taxes on large corporations.

Additionally, Sanders said it will cost $2.2 trillion to make public colleges, universities, and trade schools tuition-free and to cancel all student debt over the next decade. This will be paid for by a “modest tax on Wall Street speculation,” which he said will raise an estimated $2.4 trillion over 10 years. Housing for All and universal childcare and pre-K will also be funded by the wealth tax on the top one-tenth of one percent, or those making more than $32 million.

The fact sheet comes ahead of the Feb. 25 Democratic debate in Charleston, South Carolina, the last opportunity candidates will have to make their pitch on a national stage before Saturday’s critical South Carolina primary.

However, the debate comes shortly after Sanders faced criticism over his comments regarding former Prime Minister of Cuba, Fidel Castro, during an interview with CBS News’s “60 Minutes” on Feb. 23.

The 2020 Democratic White House candidate praised certain elements of former Cuban dictator Castro’s government and said that not everything “was bad” under his rule.

Castro imposed a totalitarian Soviet-style communist regime on the Caribbean nation in 1959 and killed thousands of political opponents in the decades following. He gave up power in 2011 to his brother, Raul, and died in 2016.

Sanders told the show, “We’re very opposed to the authoritarian nature of Cuba, but you know, it’s unfair to simply say everything is bad.”

“When Fidel Castro came into office, you know what he did? He had a massive literacy program. Is that a bad thing? Even though Fidel Castro did it?”

He later defended his comments during Monday’s town hall in South Carolina, adding that he has been “extremely consistent and critical of all authoritarian regimes all over the world including Cuba, including Nicaragua, including Saudi Arabia, including China, including Russia.”

“I happen to believe in democracy, not authoritarianism. China is an authoritarian country … but can anyone deny, I mean the facts are clear, that they have taken more people out of extreme poverty than any country in history. Why you criticize when I say that—that’s the truth. So that is the fact. End of discussion,” he added.

That so-called fact is based on a political slogan used by the Chinese regime to boost the country’s international image. As The Epoch Times previously reported, the measure of the poverty line is far below the international standard.