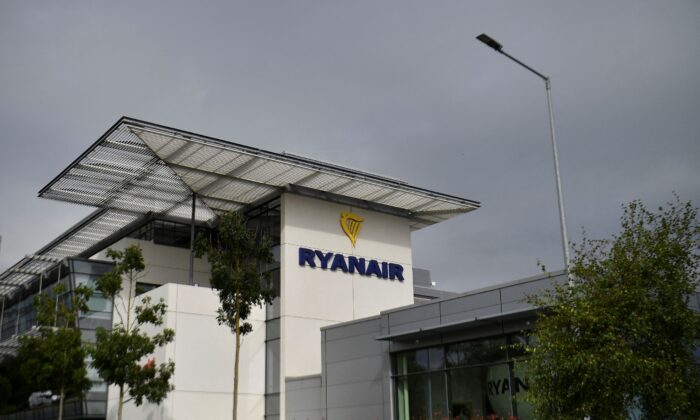 General view of the Ryanair logo at their headquarters in Dublin, Ireland, on Sept. 16, 2021. (Clodagh Kilcoyne/Reuters)
Companies

Ryanair Calls on Belarus to Guarantee No Repeat of Plane Diversion

DUBLIN—The Irish airline Ryanair on Monday urged Belarus to guarantee that there would be no repeat of the forced landing of one of its flights last May, and said airlines should not fly over Belarus without such a guarantee.

The plane was overflying Belarus on its way from Athens to Vilnius when Belarus controllers ordered it to land in Minsk, citing a bomb threat. Once it was on the ground, a Belarusian dissident journalist on board the plane was arrested along with his female companion.

Western powers responded with a wave of new sanctions and the United States this month charged four Belarus officials with aircraft piracy.

A United Nations report published on Jan. 17 found that the reported bomb threat had been invented, without identifying the source of the hoax. It said Belarus had withheld crucial information from the U.N. fact-finding team.

Ryanair Group boss Michael O’Leary said the airline supported the U.S. action. He welcomed the U.N. report, though he said it “could have gone further.”

“I think it is fundamental to the future of air travel that we do not have a repetition of what in my mind was the first case since the Chicago Convention (1944) of a state sponsored act of international piracy,” O’Leary told an investor call.

“There should be no overflight of Belarus unless appropriate guarantees are obtained that this won’t recur.”

Belarus has said it acted legally and in accordance with all international norms, and accused the West of using the episode to try to undermine President Alexander Lukashenko.

The United Nations’ International Civil Aviation Organization (ICAO) was due to consider any further actions at a meeting of its 36-member Council on Monday.