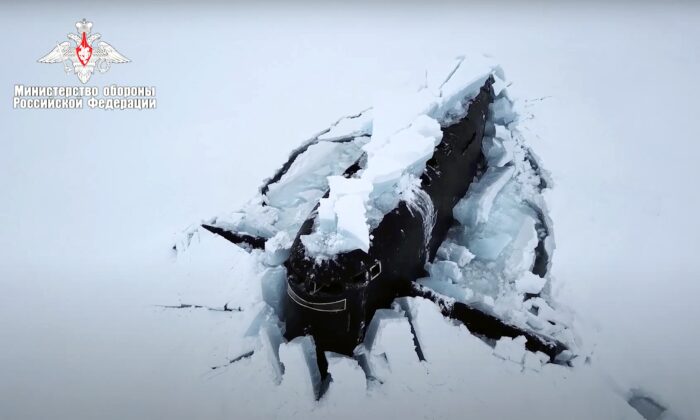 A Russian nuclear submarine breaks through the Arctic ice during military drills at an unspecified location, on March 26, 2021. (Russian Defense Ministry Press Service via AP)
Thinking About China

The world is allowing itself to be distracted by Ukraine, which is just a small part of Russia’s overall political and military strategy.

Roughly 25 years after the fall of the Soviet Union, the Russian goal has been to eliminate democratic Western influences across a number of dimensions, including global security, the rule of law, and global trade. The Russian National Security Strategy of 2020 aims to “transform the Russian Federation into a world power.” To attain this goal, Russia is applying a mix of policies and competencies in the military, political, and economic spheres. Expansion into the Arctic is a key component of Russia’s state strategy, potentially benefiting Russia both militarily and economically.

“Russia has changed the dynamic of cooperation that marked Arctic affairs in recent years and now threatens peace and stability there, and also in Europe,” Gregory Pollock, a senior Pentagon official responsible for Arctic affairs, told the Wilson Center on Oct. 25.

In the Arctic, the Russian Federation already exerts direct control over the Sakha Republic, Arkhangelsk, and Murmansk, as well as indirect control over autonomous areas: Krasnoyarsk Krai, the Nenets, Yamal-Nenets, and Chukchi districts. The Arctic is rich in minerals and other resources, including 70 percent of the world’s undiscovered natural gas.

In addition to valuable natural resources, controlling the Arctic would also provide Russia with much-needed seaports. By restoring the Northern Sea Route (NSR) route from Europe to Asia, Russia hopes to transport Chinese goods to Europe and transport energy to Asia. Strategically, securing the Arctic would provide Russia with a lifeline in the event of a war with the United States and its NATO allies. It would give Russia a secure base for its ballistic missile submarine fleet (SSBN) on the Kola Peninsula and guarantee access to the North Atlantic and the European Arctic.

More immediately, the NSR would provide Russia with a means of circumventing Western sanctions by exporting oil and gas while importing goods from Asia. The region also presents a potential strategic corridor between the Indo-Pacific, Europe, and Russia.

All of this makes the Arctic attractive to Russia, while Russian expansion into the region would threaten the interests of the United States and NATO. Russian claims on Arctic resources conflict with claims by Canada and Denmark. Russia’s militarization of the Arctic threatens NATO, while military drills have harassed U.S. Navy and Air Force operations near Alaska. Dual-use radar surveillance and communications, as well as drones, are being installed in the region, and they could be used offensively against the United States or Europe. It is possible that Russia would deny U.S./NATO forces access to the waters surrounding the Kola Peninsula and that Russia could deploy its SSBNs through the Greenland-Iceland-UK gap, disrupting NATO’s sea lines of communication for its carrier battle groups.

The United States is also one of eight nations in the Arctic Council, the others being Canada, Denmark, Finland, Iceland, Norway, Russia, and Sweden. With the exception of Russia, every member also belongs to NATO (Sweden and Norway applied for NATO membership last month), and they all have a vested interest in restricting Russian expansion in the region. Since the invasion of Ukraine, the other members have recognized the increased threat Russia poses in the Arctic, and they are now sharing intelligence on Russian activities in the region.

If It Comes to War

Russia focuses more on a domestic and contiguous land-war scenario, as it has more land borders than the United States. Russia borders 14 countries, including NATO members. The United States, by contrast, has only two land borders, both of which can be left largely undefended. Therefore, Washington can focus most of its spending, planning, and training on scenarios involving an overseas war. U.S. forces in South Korea and Japan are positioned close to Russia’s Far East. NATO and the United States in the North Atlantic and Alaska are directly focused on the Russian Arctic.

The United States leads in almost every indicator of naval firepowers, such as ballistic-missile nuclear-powered submarines and attack/guided-missile submarines, aircraft carriers, cruisers, destroyers, and frigates. Russia is leading in amphibious ships with 49 compared to 31 for the United States. A big weakness for the United States in terms of Arctic engagement is that Russia has 40 military icebreaker ships, while the United States has just two, both operated by the Coast Guard and near the end of their serviceable lifespans.

The Russian Federation’s vast land area makes transportation networks extremely important, and this creates another weakness for the Russians. These networks are unevenly distributed, favoring transport to and from Moscow, St. Petersburg, and Europe while neglecting the Russian Far East, Asia, and the Arctic. The country’s port systems are overloaded. Also, there are too few well-engineered bridges capable of supporting expanded cargo loads.

As energy exports are a significant component of the Russian GDP, gas pipelines are one of the most important components of the country’s infrastructure. Gas pipelines to Europe have been a significant tool in increasing Russia’s influence in the region, as has been seen since the beginning of the Ukraine crisis. The infrastructure in the Arctic region is integral to Russia’s ambition of becoming a global energy superpower. Meanwhile, the apparent sabotage of the Nord Stream gas pipelines has demonstrated how fragile an economy can be. Cutting Russia’s other pipelines would sink the economy. But this can only be done if Europe finds a workaround to replace the energy they currently source from Russia.

Antonio Graceffo
Follow
Antonio Graceffo, Ph.D., China economic analyst, has spent more than 20 years in Asia, a graduate of Shanghai University of Sport, holds a China-MBA from Shanghai Jiaotong University, currently studies national defense at American Military University. He is the author of "Beyond the Belt and Road: China’s Global Economic Expansion.