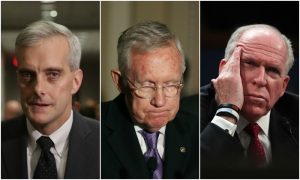 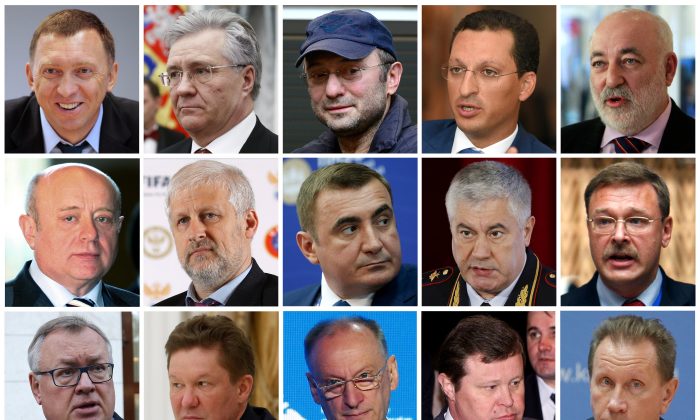 Here Are the Russian Businessmen, Officials on the New US Sanctions List

The U.S. Department of the Treasury’s Office of Foreign Assets Control released a statement which outlined these activities, “including continuing to occupy Crimea and instigate violence in eastern Ukraine, supplying the Assad regime with material and weaponry as they bomb their own civilians, attempting to subvert Western democracies, and malicious cyber activities.”

Below are the most prominent businessmen targeted along with their main assets and connections, as well as extracts from the U.S. Treasury statement.

Deripaska is ranked by Forbes magazine as Russia’s 19th richest businessman with a net worth of $6.7 billion. Deripaska holds regular meetings with Putin, invested heavily in Russia’s 2014 Sochi winter Olympics, and has said his own interests are indivisible from the state’s.

En+ has a 48 percent stake in Rusal, one of the world’s largest aluminum producers. Rusal is listed in Hong Kong and counts Glencore among its shareholders.

Rusal has assets in Italy, Ireland, Sweden, as well as Nigeria, Guyana, Guinea, and a stake in Australian QAL, the world’s top alumina refinery. Over 10 percent of Rusal’s total sales go to the United States.

Forbes magazine ranks Vekselberg as Russia’s ninth richest businessman with a net worth of $14.4 billion. He is famous for bringing back a collection of Faberge eggs to Russia.

Apart from Russia, Renova has assets in the United States and Europe, of which the most notable are stakes in the Swiss companies Sulzer, Schmolz+Bickenbach and Oerlikon. They are not under sanctions.

Vekselberg and his partners also have a stake in Rusal, which supplies aluminum to the United States and other countries.

“Viktor Vekselberg is being designated for operating in the energy sector of the Russian Federation economy. Vekselberg is the founder and Chairman of the Board of Directors of the Renova Group.”

Shamalov married Putin’s youngest daughter Katerina in February 2013, multiple sources who were at the wedding told Reuters. After the marriage, he swiftly grew his wealth through investments in Russia’s biggest petrochemical company Sibur. Unconfirmed media reports say Shamalov and Putin’s daughter have since split.

Forbes magazine says Shamalov is Russia’s 72nd richest businessman with a net worth of $1.4 billion. Shamalov now owns 3.9 pct in Sibur. Gennady Timchenko, a close associate of President Vladimir Putin, holds a stake in the company as well. Sibur is not under sanctions.

“Kirill Shamalov is being designated for operating in the energy sector of the Russian Federation economy. Shamalov married Putin’s daughter Katerina Tikhonova in February 2013 and his fortunes drastically improved following the marriage.”

ANDREI SKOCH, a deputy in the Russian State Duma, the lower house of parliament

Forbes magazine says Skoch is Russia’s 23rd wealthiest businessman with a net worth of $4.9 billion. Skoch’s father, Vladimir, owns a stake in USM holding. Businessman Alisher Usmanov is a key shareholder in USM. Neither Usmanov nor USM are under sanctions.

Via USM, Skoch’s father co-owns Metalloinvest, Russia’s largest and the world’s second-largest mining company by the size of iron ore reserves, with units in Ireland, Switzerland and Guinea.

SULEIMAN KERIMOV, member of the Russian upper house of parliament

Kerimov is ranked by Forbes magazine as Russia’s 20th wealthiest businessman, with a net worth of $6.4 billion. Embroiled in a tax fraud investigation in France, the Kremlin has said it will do all it can to help him.

Polyus, Russia’s largest gold producer, is controlled by Kerimov’s family. Polyus is not under sanctions.

Siberia’s Surgut sits on Russia’s biggest corporate cash pile, with bank deposits and cash totaling 2.2 trillion rubles($38 billion) in 2017, according to Reuters calculations based on its regulatory filings.

The company is owned by its employees, according to official data. Gennady Timchenko, a friend of Putin who is under U.S. sanctions, said in a 2012 interview with Forbes magazine that Surgut was trading oil through Timchenko’s trading companies.

Surgutneftegaz is already under sanctions.

“Vladimir Bogdanov is being designated for operating in the energy sector of the Russian Federation economy. Bogdanov is the Director General and Vice Chairman of the Board of Directors of Surgutneftegaz, a vertically integrated oil company operating in Russia.”

Arkady Rotenberg and his brother Boris Rotenberg are already under sanctions due to their close connections to Putin whom they have known since they practiced judo together in St Petersburg in Putin’s younger days. Arkady Rotenberg is now overseeing the construction of a bridge Putin has championed to Russia-annexed Crimea.

Andrey Akimov, chairman of the board at Gazprombank

Mikhail Fradkov, president of the Russian Institute for Strategic Studies

Sergey Fursenko, member of the board of directors of Gazprom Neft

Oleg Govorun, head of the Presidential Directorate for Social and Economic Cooperation with the Commonwealth of Independent States Member Countries

Alexey Dyumin, the governor of the Tula region

Konstantin Kosachev, the chairperson of the council of the Federation Committee on Foreign Affairs

Evgeniy Shkolov, an aide to the President Vladimir Putin

Timur Valiulin, the head of the General Administration for Combating Extremism within Russia’s Interior Ministry

Alexander Zharov, the head of Roskomnadzor